BARACK OBAMA & THE IMPACT OF THE URANUS/PLUTO CYCLE

Geodetic Astrology is based on a world map of 360 degrees, commencing at the 0 degrees meridian in Greenwich with 0 degrees Aries as the Midheaven position.  Each degree of geographic longitude corresponds to a degree of the zodiac.  Locations with 0 degrees Taurus Midheaven are located 30 degrees east of Greenwich and so on around the world.

The Geodetic Ascendant and house cusps are calculated from the Geodetic Midheaven.  Geodetic astrology certainly gives an interesting new perspective as to how you relate to your birth place, or any other location in the world.

The natal planets are placed into the empty geodetic chart for the chosen location to coincide with your life purpose in that location.  I use the Placidus cusps, but you may prefer another system of house division.  Even when the exact birth time is not known the natal planets and noon position of the Moon in the geodetic houses still provide interesting information.

Natal planets relocating onto the Angles and in particular conjunct the MC/IC and Asc/Dec axes will gain new significance.  Even without an accurate birth time both hard and beneficial natal aspects can provide new and surprising insight when expressed through different houses.

My article The Swings & Roundabouts of Australian Politics, also on this website, provides further insight into Geodetic astrology.

When examining the chart of the leader of a country locate the geodetic chart for the seat of power, that is Washington D.C. for the USA.

Washington D.C. has a Geodetic Midheaven of 12º58'Capricorn and Ascendant of 23º10'Aries.  The transits for a specific period or event are placed in the outer wheel of the bi-wheel.

US President Barack Obama was born on August 4, 1961, 7:24 pm AHST Honolulu, Hawaii (Data Rodden AA). His geodetic chart for Washington DC for his time and date of birth places his natal Ascendant of 18º07'Aquarius in the geodetic 11th house and natal Midheaven of 28º57' Scorpio in the geodetic 8th house. 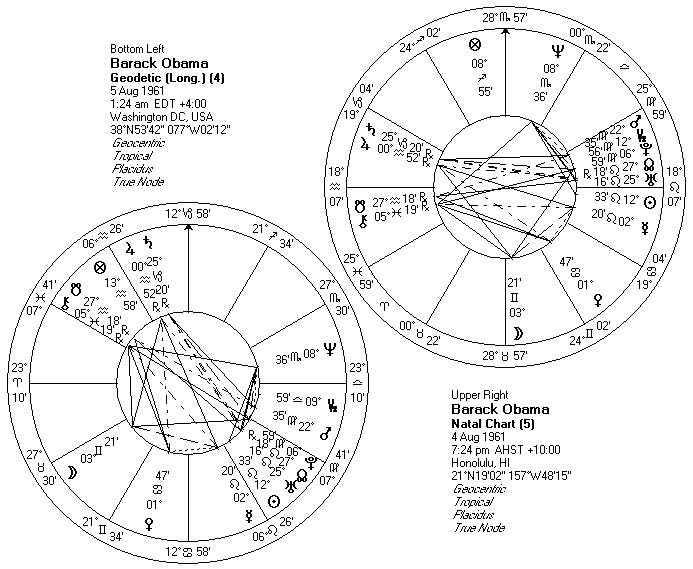 The natal or birth chart is always the backbone of any astrological reading.  It is the basic blueprint of the life potential.  A whole article could be written on the interpretation of Obama's natal chart, but I have covered just a few relevant points.   With the Sun, Mercury, Uranus and North Moon Node in Leo, Obama is a born leader.  The Gemini Moon in the natal 4th house is square to Pluto = deep emotional bonds to home and family.

The heavily occupied 7th house describes powerful partners and opponents.  Saturn and Uranus, co-rulers of his Aquarian Ascendant (and rulers of his natal chart), form a quincunx aspect to each other, so there are bound to be tensions and challenges from his opponents.  However there is also great incentive to 'break new ground'.  His Ascendant in Aquarius describes him as a humanitarian and the placement of his Mercury, particularly the aspects to his Moon, Jupiter and Neptune, shows an astute, caring and creative mind.  Under some circumstances this same pattern can attract misunderstandings and confusion.

In the Washington Geodetic chart Obama's natal planets have shifted into different houses.  The tension between Saturn and Uranus shifts to other areas of his life, namely his professional status and creativity.

Both natal and geodetic charts work and both are relevant.

Figs. 2 & 3  Bi-wheels show Mr. Obama's natal planets located into the Washington Geodetic chart in the centre and the transits for the two 2013 Uranus/Pluto squares on May 20 and November 1 in the outer wheels.

The current series of waxing squares between Uranus and Pluto commenced in 2012 and will continue until early 2016.  Transiting Pluto is currently placed in the Washington geodetic 9th house conjunct the Midheaven, square Uranus in the geodetic 12th house.  By April 2014 Pluto will have moved into the geodetic 10th.

The cycle between Uranus and Pluto commenced with the conjunction in the mid 1960s when Obama was a young boy.  His parents divorced in 1964.

Incidentally, all those born in the mid 1960s, at the time of the conjunction, will be experiencing the full effects of the current waxing squares, which involve major change and inner or outer transformation. Such effects may be initiated by these individuals, or attracted to them through outside circumstances. The natal chart can provide clues as to how the changes will manifest.

In his book 'The Combination of Stellar Influences", Reinhold Ebertin describes the Uranus/Pluto manifestation as 'Revolution, the attainment of great objectives by an immense application of effort'. Michael Munkasey in his book "Midpoints - Unleashing the Power of the Planets" associates the Uranus/Pluto energy with "intolerance of other's ideas, obsession to control and change the old in order to bring in the new, disruptions of processes". 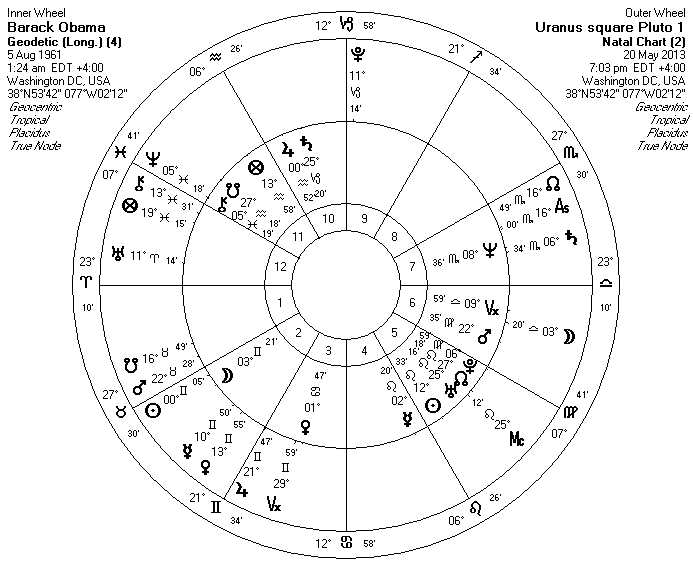 Impact on the Washington geodetic chart for this square aspect highlights transiting Pluto in 9th (11º14' Capricorn) conjunct the Midheaven (12º58' Capricorn) = power issues and struggles relating to conflicted ideals, philosophies and moral issues, square Uranus in 12th  = sudden developments, health of the nation, resistance from others and hard work behind the scenes. 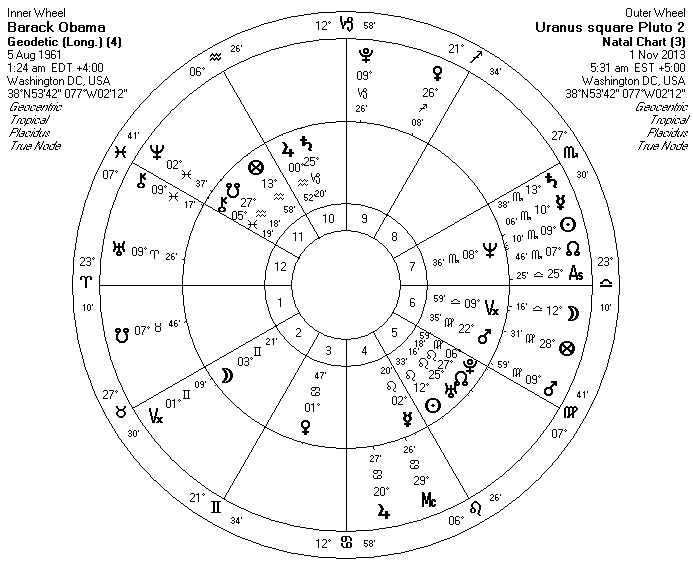 The November 1 square is interesting, in that it occurred immediately prior to the Annular Eclipse of the Sun (November 3), with the Sun and Moon in applying conjunction to transiting Saturn and Sun exactly conjunct Saturn on November 6) = hard times and milestones with some compromise possible through the conservative nature of Saturn.

Transiting points in Scorpio at the time of this Uranus Pluto square include the Sun, Mercury and Moon Nodes axis conjunct Obama's natal Neptune in geodetic 7th, which is square to his natal Sun in geodetic 5th   =intensified agreements and communications, media glare. Transiting Mars opposition transiting Chiron sits across the 6th/12th cusps and Mars was approaching its biennial return to its natal position =depleted power and energy, preparing new strategies to generate healing.

Transiting Jupiter was applying to the opposition to Obama's natal Saturn in geodetic 10th, to form a T square to the 23º 10' Aries geodetic Ascendant, suggesting some positive adjustments or developments within a short period of time.

The timing of the November 1 pattern must have considerable personal impact on the horoscope of Mr. Obama's Presidential win (November 4, 2008).

For Cosmobiologists  both 2013 Uranus/Pluto squares form a powerful link across the 90-degree dial in a sesquiquadrate aspect to Obama's natal Uranus (co-ruler of his natal chart) and natal Moon Nodes, plus a close T square to his natal Vertex.  The inclusion of the US geodetic Midheaven is consistent with Obama's desire to adhere to his idealistic, futuristic plans.  (Fig. 4) 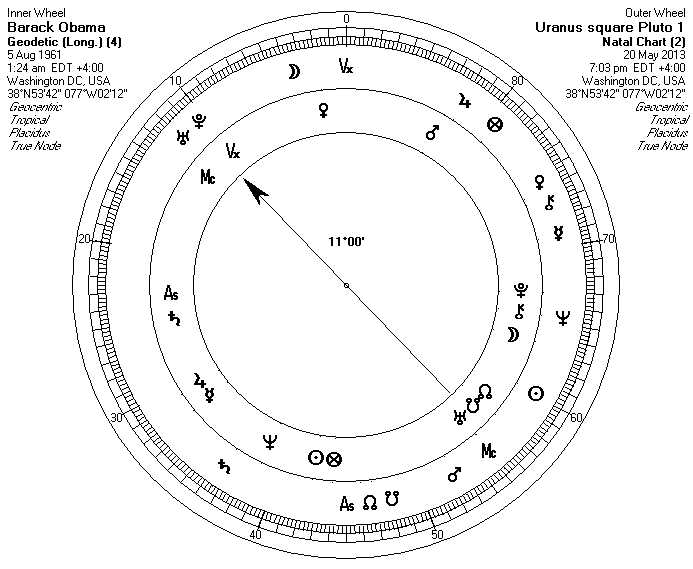 Each time Uranus forms another square to Pluto, astrologers can review the additional aspects to each chart, to assess the different slant the Uranus/Pluto message of radical passion, change and transformation will take.  This will be an ongoing theme at least until 2016.

The dates of future Uranus Pluto squares are .. April 21, 2014, December 15, 2014 and March 16, 2015. The aspect recurs in January 2016, but is weaker due to a one degree orb of influence.  In the case of those born in Australia or other Far East longitude countries, the exact date of occurrence may be the following day, so check your Ephemeris.

Researchers can place the natal planets of past US Presidents into the geodetic chart of Washington and add the transits of a significant event to the outer wheel.  I found the charts of President J.F. Kennedy and Ronald Reagan to be of particular interest.