THE ENIGMA OF RETROGRADE MERCURY

The interpretation of Mercury in its retrograde motion has generated extreme theories and mindsets amongst astrologers, ranging from disregard to paralysed inactivity.   Periodically there is a changing angular relationship between Mercury and the earth that creates Mercury’s apparent, not actual, backward motion.  But it is the interpretation of Mercury retrograde that warrants our respect and research.

Classically Mercury is the planet of communication, the mind and transportation.  When in retrograde motion, Mercury is said to coincide with unsettled, misdirected communication, changeable plans, plus human and mechanical errors.  And indeed this can be so, especially if the transiting position of retrograde or stationery Mercury strongly aspects planets or points in your natal chart – ask any astrologer.  Stationery Mercury occurs immediately before and after the short retrograde Mercury period.

Positively speaking, Mercury retrograde periods are ideal for reflection, analysing past decisions and generally tidying up unfinished business.  There is no doubt that any planet ‘changing direction’ in this way will change attitudes and ambitions.

Mercury is retrograde only three times per year for approximately three and a half weeks at a time.  This means that those born with Mercury retrograde are very much in the minority.  During their lifetime these people must learn to live, work and play successfully during the periods Mercury is moving direct, that is in the opposite direction to their birth direction. However, when Mercury moves retrograde it becomes their personal comfort zone.

For only three short periods in the year, life seems to flow easier for those with Mercury retrograde at birth, so in order to tap into their personal success potential,  it is essential for them to develop resilience and a correct approach to life’s challenges.

Has it occurred to those born with Mercury retrograde that they are fated to learn more and acquire more tools to deal with life in general?  Or does it sound like an additional dose of Karma?  It will be very clear to them that they ‘think outside the square’ and are often viewed as poor communicators, misunderstood and subjective in their outlook, possibly by the larger number of people born with Mercury direct.

But does the majority rule?  No, of course not – different mental wave links equate to different life perspectives.

Those born with Mercury direct experience the transiting Mercury moving in the direction of their (birth) comfort zone for much of the time.  Little wonder the effect of a Mercury retrograde transit has such a concentrated and unsettling effect on them.

Frances McEvoy, one of the great insightful astrologers of our time, wrote an illuminating article entitled ‘Understanding Retrograde Planets’, published in the American Federation of Astrologers, Inc. Bulletin Vol. 48 No. 9 September 4, 1986.

Frances believed that “When a planet is retrograde, the energy it symbolises is turned inward and absorbed, and will be taken for granted on a deep psychological and unconscious level.  The person will not seek that kind of experience outside himself, for he finds it deep within.  He will experience a need for personification where the retrograde planet is concerned.”

A valuable tool in the research astrologer’s library is an accurate Book of Charts of well known famous people, such as the series written by Lois Rodden (an on-line facility for Lois’ data is also available www.astrodatabank.com).  Rather than read a single book or listen to a single teacher and then make sweeping statements about Mercury retrograde -- or even limit your statements to your own astrological experience, broaden your horizon and look to as many charts as you can to establish an accurate interpretation factor, in this case Mercury retrograde in the birth chart.

Mythology teaches us that Mercury or Hermes was a petty thief, inventive and musical.  It makes sense that any planet situated close to Mercury retrograde in the birth chart will, interpretatively speaking, be sucked in and personalised along with the thought processes of Mercury -- to colour up the chart with a projected self-image, plus an indication of who may be attracted into the life.

This particular research is based on conjunctions to retrograde Mercury only.   Other aspects have not been included in the study, but are open to research.

Below are some examples found of natal retrograde Mercury within an acceptable orb of influence of a conjunction to the other planets.  The zodiac sign in which Mercury is placed is very important, as it describes the expression of the particular mental processes.

As anticipated, there were more conjunctions between Mercury retrograde with the Sun and Venus because Mercury permanently travels closer to them in the zodiac than the other planets.

Whilst Mercury in Direct motion will regularly form a conjunction to all the planets, it is not as common for Retrograde Mercury to form a conjunction with the outer planets.  Periods when this occurs, especially when the slow moving outer planets are clustered together in the zodiac, are noteworthy from a world historic viewpoint.  However, this is research for a separate article.

Today we are concentrating on individuals.  A few listed examples have multi conjunctions to Mercury R.   The additional planets for these examples are listed in brackets after the names.

It can never be presumed from such a small list of examples that any Mercury R conjunction is a fated trend, for example the three murderers with Mercury R conjunct Venus.   As can be seen by the other examples in that category, the personal choice of expression is the soul defining characteristic of the personality.  My examples merely ‘get the ball rolling’.  In some examples more than one birth date is available.

Mercury R conjunct the Sun emphasises a mindset to lead and shine in a given field.  This conjunction stands out in my Books of Charts of famous people.

The natal chart of Australian singer Helen Reddy, famous for her anthem ‘I Am Woman’ (Data ‘Profiles of Woman’ by Lois Rodden) is attached.  Observe the conjunction between retrograde Mercury and the Sun. 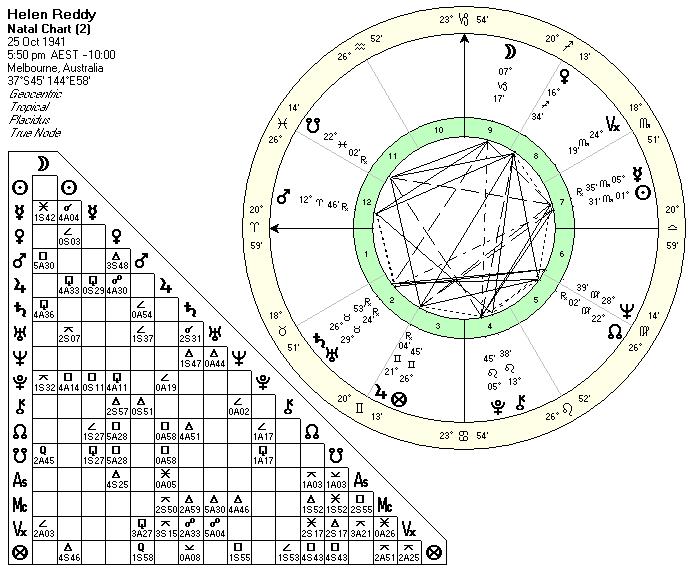 Mercury R conjunct the Moon highlights subjectivity, a profound link with the feminine, the desire to be famous, travel, association with the public eye.

Mercury R conjunct Venus highlights relationships, ranging from intense, in need of work to manifestation of dissatisfaction and turmoil.  Profound artistic gifts are possible if this conjunction is expressed through the Arts.  Sensual comfort may also be a factor.

Mercury R conjunct Jupiter is found in the charts of expansive thinkers, who extend the boundaries of possibility.  Internalised Mercury retrograde conjunct expansive Jupiter is a contradiction of terms.  More examples are required in this group.

Mercury R conjunct Saturn heightens mental seriousness, thoroughness, ordered thought processes and the focus towards achieving goals, but could give some depression if not applied positively.

Mercury R conjunct Chiron gives the ability to heal, provide healing words to others and create a formula to overcome childhood wounds.

As can also be seen in the case of some conjunctions, more examples need to be found to expand existing interpretations.  If you have a retrograde Mercury in your natal chart conjunction to another planet, do email me and let me know how it works for you, so that I can expand and modify my interpretations for a possible article later.