The Balsamic Phase
The Balsamic Phase immediately brings to mind the period when the Moon makes its waning 45-degree aspect to the Sun, approximately 3&frac12; days prior to a new moon.  Symbolically the Lunar balsamic phase represents a short period of cleansing, meditation and preparation for the future.

The Balsamic factor can be successfully applied to other astrological bodies as demonstrated by my 40 years of study of this subject, which I wrote up in many articles plus my book ‘The Health Zodiac’, published in 1990 and 1993.

The Solar Balsamic factor is especially strong in the month prior to our birthday and is often climaxed by an event just prior to or immediately after our solar return.  We have only to listen to our news services to hear of so many people thrust into fame or notoriety around their birthday.  The Sun represents vitality and a lull in physical strength during the Sun’s balsamic phase to its natal position is often quite marked.  Fluctuation of physical health can also be the result of inner soul searching and unsuccessful attempts to deal with external events and pressures.

Saturn/Neptune 36-year Health Cycle
Both Saturn and Neptune are slow moving planets, Saturn taking 29.42 years to make its full journey through the zodiac and slower moving Neptune 163.7 years.  What this means is the Saturn/Neptune cycle will have phases, interpreted like the phases of the Sun and Moon, where the faster moving Moon completes its journey faster than the Sun.

Saturn and Neptune can follow a similar journey, with faster moving Saturn generating the phases or aspects to Neptune.  The great German astrologer Reinhold Ebertin interprets the energies of Saturn and Neptune as ‘a struggle between idealistic and materialistic tendencies’.

Saturn and Neptune do not sit comfortably together.  Saturn is formative, crystallising, conservative and wise, whilst Neptune is compassionate, intangible, sensitive and without boundaries.  Negatively combined they guarantee that the material things in life become intangible and out of reach.  Positively combined we experience a heightened perception and take greater responsibility for the welfare of the less fortunate.

Past Observations
When writing ‘The Health Zodiac’ in 1989 I focused on the Saturn/Neptune conjunctions or start of the cycles, to investigate past plagues and pandemics and the way humankind had dealt with them.  In Astrology nothing is all positive and nothing is all negative.  Even as I write today in the midst of the COVID pandemic with its loss of so many, there is much that is good, especially the bravery of the world and its citizens amidst the heartbreak and brilliance of the medical profession to help get us through this time.

In earlier conjunctions such as the Great Plague in London in 1666 when Saturn was conjunction Neptune in Capricorn (see Fig. 1), it seemed that nature, the people or an act of God intervened as the Great Fire of London raged to cleanse the city, but in recent conjunctions, because of advancing technology and through sheer necessity, medical science progressed at an accelerated rate. 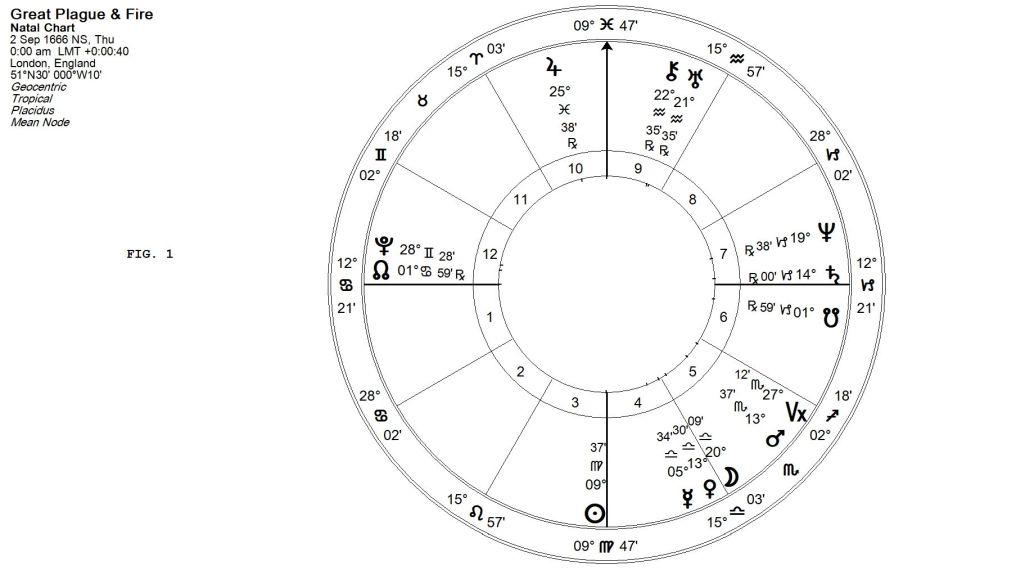 In more recent times when Saturn and Neptune slowly move towards their conjunctions, world health conflicts surface and/or a huge concentration of energy and resources are directed into devising cures and treatments to improve the lives of the world’s citizens.

A few interesting examples are …

1882 – Saturn conjunction Neptune in Taurus. In 1894 the plague reappeared in Hong Kong and ships from Hong Kong spread the plague around the world.  India suffered most and more than 10,000,.000 people died from the plague between 1894 and 1914.

In the late 1800s Louis Pasteur established the existence of living microbes which were associated with specific diseases.  He observed that one micro-organism could destroy another, which he theorised could halt the spread of disease.

August 1917 – Saturn conjunction Neptune in Leo. The Spanish Flu, documented as occurring between 1918 and 1919 -- a worldwide influenza epidemic that killed millions.  Because the conjunction of the planets occurred in August 1917 and the Balsamic phase existed many months prior to this, I suspect there were cases earlier than 1918, but the explosion of cases and consequences occurred during 1918-1919 (See Fig. 2) 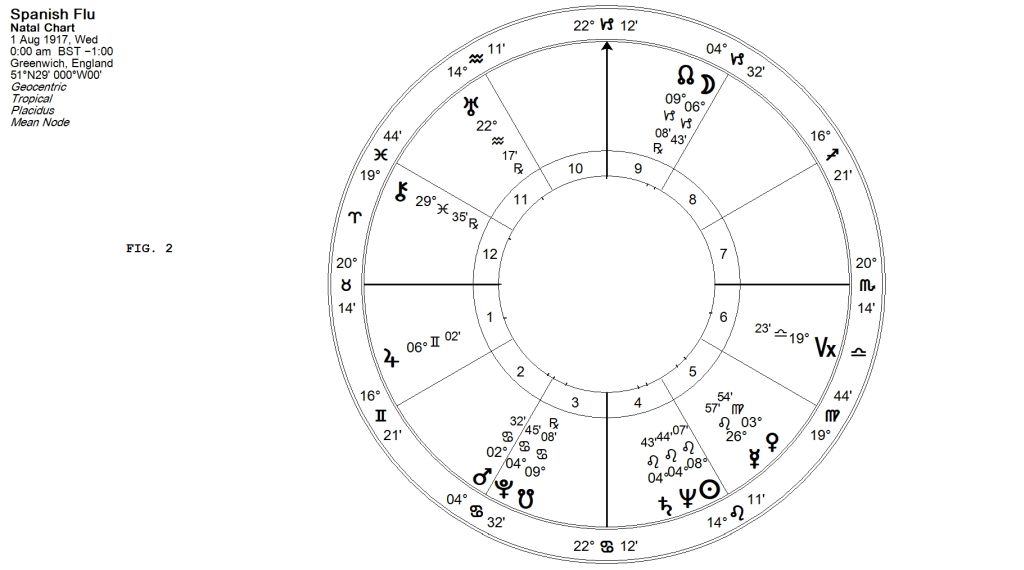 In London in 1928 Sir Alexander Fleming observed that Penicillium notatum, a common mould, could destroy staphylococcus in culture.  But a practical method of extracting the penic illin was not devised until 1938.

November 1952 and May/July 1953 – Saturn conjunction Neptune in Libra. The Polio epidemic was pronounced.  In 1953 Dr. Jonas Salk, an American research scientist, developed a polio vaccine.  Dr. Salk and his family were among the first to receive the vaccine; in 1954 it was mass-tested and by 1955 was in general use.

March, June and November 1989 – Saturn conjunction Neptune in Capricorn.  They were also conjunction in Capricorn at the time of the Great Plague in London.  The AIDS epidemic which came to the notice of the world in 1981, reached a crescendo in 1989.  With the rapid increase in the number of cases, AIDS research accelerated and in June 1989 Dr. Jonas Salk unveiled an experimental drug and had high hopes of developing a vaccine to prevent AIDS infection in humans and cure those already infected.

It is interesting that the same Dr. Salk who did so much for humanity in 1953 with his polio vaccine, once again attempted to pioneer new horizons in medical science when Saturn and Neptune were again conjunction in 1989.

Smallpox and the Outstanding success of Vaccination
Smallpox was the ancient scourge of the past world population.  It was even detected in Egyptian mummies and spread around the world by travellers.  3 of 10 sufferers died and those recovering had severe scars.

English doctor Edward Jenner developed a vaccine in the late 1700s and early 1800s.  In 1801 Jenner published his treatise ‘On the Origin of the Vaccine Inoculation” in the hope that his discoveries would generate the annihilation of smallpox.

In 1959 the World Health Organization commenced a World Smallpox Eradication Program.  However due to funding and other delays it took until May 8, 1980 for the 33rd World Health Assembly to declare the world free of Smallpox.

Whilst we are pondering about the handling of the COVID pandemic remember that without the vaccine, Smallpox would still be a world scourge.

Cause or Effect?
We can hardly presume that the Saturn/Neptune cycles themselves could create worldwide epidemics, but I like to think of them as reminders to humanity, symbolic indicators that our house is not in order.  In the Balsamic phase or years leading up to the conjunction, there appears to be a clouding of awareness and values, but also enhanced intuition which can magnify fear unless handled well.  But thankfully the approaching conjunctions shake us from our lethargy into a phase of increasing light and new perspectives.

This can best be illustrated by other major factors of the 1989 Saturn/Neptune conjunction, the worldwide recognition of the greenhouse effect and the willingness of the people to participate in the preservation of our planet.  The fear, psychic awareness and responsibility associated with Saturn/Neptune, which I spoke of earlier, bonded together to produce ultimate good for all.

Approaching World Health Pattern
Although Saturn and Neptune are closely aligned during most of 2025, the next conjunction will be at 0deg. 45min. of Aries on February 20, 2026 GMT (Greenwich Mean Time) England (See Fig.3). The sign of Aries means independence and a pioneering spirit.  In 1989 I predicted that there could be a further progression towards personal responsibility for health and welfare.  However this should not mean self-proclaimed experts taking control.  Wise citizens will trust our medical experts who have proven their skill to contain and/or eradicate past epidemics .

Any negative expressions of Aries such as overt aggression will be outdated.  The fabulous Aries energy is far better directed towards preserving the planet and the people who inhabit it.

In 1989 I wrote that during our current Balsamic phase and the lead-up year 2025 there would greater involvement with medicines, dealing with pollution, personal and political immunity, martyrdom, the oceans and their harvest, water farming, accommodation on water, clean drinking water and new ways of achieving it.  All this seems to be happening earlier than suspected.

The Saturn/Neptune conjunction year of 2026 may well be a year of enforcement of laws to protect the whole rather than specific individuals.  But as in the past it could be a vulnerable period for world health, which will test the brilliant minds of the time.  Alternatively there may some amazing progress from the same brilliant minds to protect the world and its people. 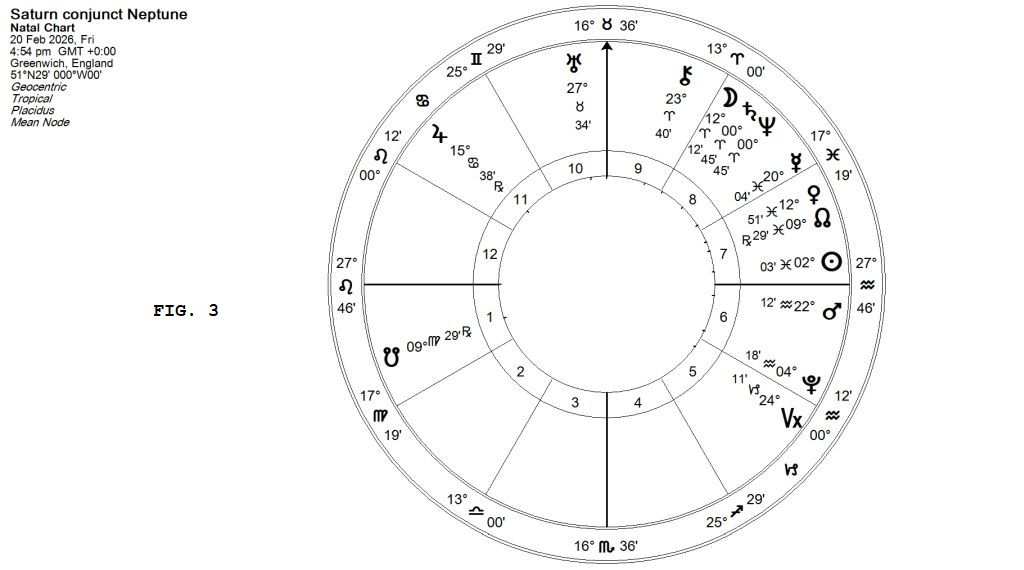 AS I WRITE we are in the Balsamic phase of this planetary cycle, which was strongly emphasized in January and September/October 2021. This is a time to cleanse, consider and prepare for the future, and trust our medical experts, who have continuously proven their skill to contain and/or eradicate past epidemics.

Despite the hocus pocus generated by fear, the only way forward is trust, respect and the care of others less fortunate.  Even in this current climate much of the world’s population is demonstrating this way forward, which if we remember, has already been proven by our forefathers and mothers.