Examining some of the astrological implications of this tragic mystery

The fate of missing Malaysian Flight MH370 continues to puzzle and distress the people of the world.  Thoughts everywhere are with the relatives of the missing passengers and their loved ones.  Astrologers world wide are using their skills to try to shed some light on the matter.

Flight 370 departed Kuala Lumpur on March 8, 2014 at 0:41 am, slightly later than its scheduled time of departure.  The exact time of departure is considered the birth of the flight and the duration of the flight its lifespan.  This chart should give us some indication of the life and fate of the plane and its passengers (Fig. 1 Flight 370 Departure).

The end of life, or in this case the end of the flight, is depicted by the IC (Immum Coeli or ‘undersky’) or 4th house cusp of the chart.  The IC is 5deg. 28min. Pisces, in a tight conjunction to Neptune, ruler of Pisces, at 5deg.30min.  The Sun conjunct to Chiron and the Vertex, all in Pisces, are placed in the 4th house with Neptune.

The other Water houses, 8th and 12th, should also be considered.  Jupiter, ruler of the Ascendant and the chart itself, is in the 8th house of death, sesquiquadrate Saturn in 12th house of the subconscious, past lives and secret enemies.  Ruling planet Jupiter is opposition Pluto and square to Uranus in 5th,  a ‘T’ square describing the disruption and life changing experiences this flight has caused for the passengers, their families and loved ones.

Neptune conjunct the IC in the 4th house can describe a watery end, but Neptune also rules deception, massive fraud, foreign lands, drugs and international media coverage.  The Sun conjunct Chiron in Pisces in 4th is consistent with one of the many theories -- that the pilot was either ill or incapacitated.

This chart is interesting in that all birthdays in the middle 1960s had the applying or exact conjunction of Uranus to Pluto in Virgo.  We are now in the period when Uranus in Aries is in its waxing square to Pluto in Capricorn.  This current cycle started in 2012 and will continue until early 2016.  Transformation will affect Malaysia and new rules will prevail.

The Malaysia natal chart has Pluto conjunct the IC opposition Chiron in Pisces, with Chiron making its first return for the wounding/healing experience this involves.  Jupiter is in a waxing square to its natal position, conjunct the natal Moon Nodes axis, which is placed in the 2nd/8th houses.  Natal Saturn in Aquarius is in the 9th house of long distance journeys, suggesting the need for extra care in this area.

Equinox and Solstice charts compared with cities and countries give indications of the 3 months ahead.  The last Solstice was on December 22, 2013.   Situated at Kuala Lumpur it shows Mars rising in 1st house opposition Uranus in 7th  (= accidents).  The Solstice Sun at 0 deg.0min. Capricorn is conjunct the IC in the Solstice 3rd house and opposition the Midheaven and Hades. 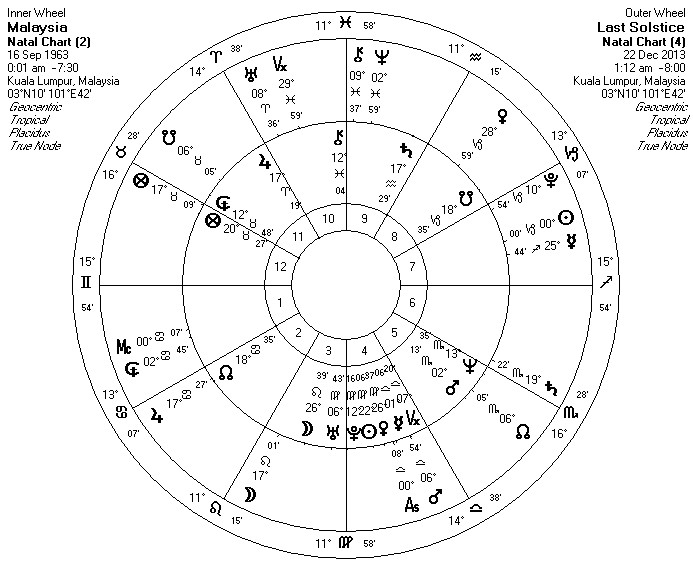 Overall this combination shows a fated occurrence, an accident of destiny, probably caused by a misjudgement or blunder – however with such aspects we cannot rule out sabotage.  (Fig. 3 Bi-Wheel Secondary Progressed Malaysia & Takeoff Chart) 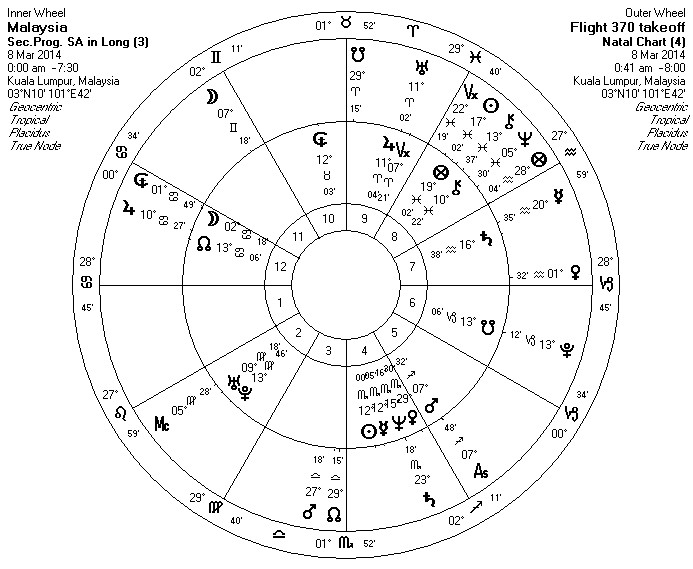 FOR COSMOBIOLOGISTS we have a tri-dial of Malaysia's independence, the last Solstice and the Flight 370 takeoff charts.  Being only months apart, some of the slow moving planet positions for the Solstice and takeoff charts will be close.  However on the 90-degree dial the transiting takeoff Saturn has clicked into place to aspect the natal Vertex and Solstice Mars and Uranus (=fated death by accident),   This axis forms a midpoint to Malaysia's natal Mars and Pluto, Chiron, MC, which Reinhold Ebertin in his book 'Combination of Stellar Influences' interprets as "sudden disasters or calamities of great consequence". 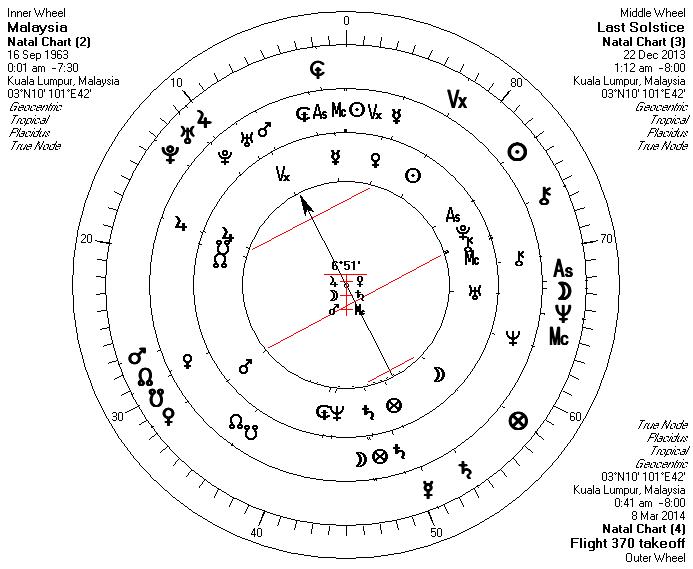 It is possible to place a chart onto a map of the world and this practice is known as Astrocartography.  The map shows where on the globe the planets of the birth chart will be exactly on the IC (Immum Coeli), the Midheaven, Ascendant or Descendant.  These points, known as the ‘Angles’ are very effective in an accurately timed chart, showing geographical areas of power, danger or success, depending on the planet and its placement in the natal chart.

US astrologer Jim Lewis introduced this system many years ago and it has been a source of fascination to astrologers ever since.

Placing the Flight 370 takeoff chart on the world map leads me to the natal Neptune, Chiron and Sun which are close to the IC in the natal chart.  These are the points I was most drawn to in the takeoff chart.  Their exact positions on the IC fall in the Indian Ocean, west of Western Australia -- the area of the search at the time of writing.

In addition Pluto is exactly on the Descendant and Jupiter and Hades are on the Ascendant south west of Western Australia.

Extending these IC lines further north we see that other countries such as Singapore, Malaysia, China and USSR, are strongly influenced by energies of the Neptune, Chiron and Sun in Pisces.  Whether further clues can be found in any of these alternate locations is yet to be seen. 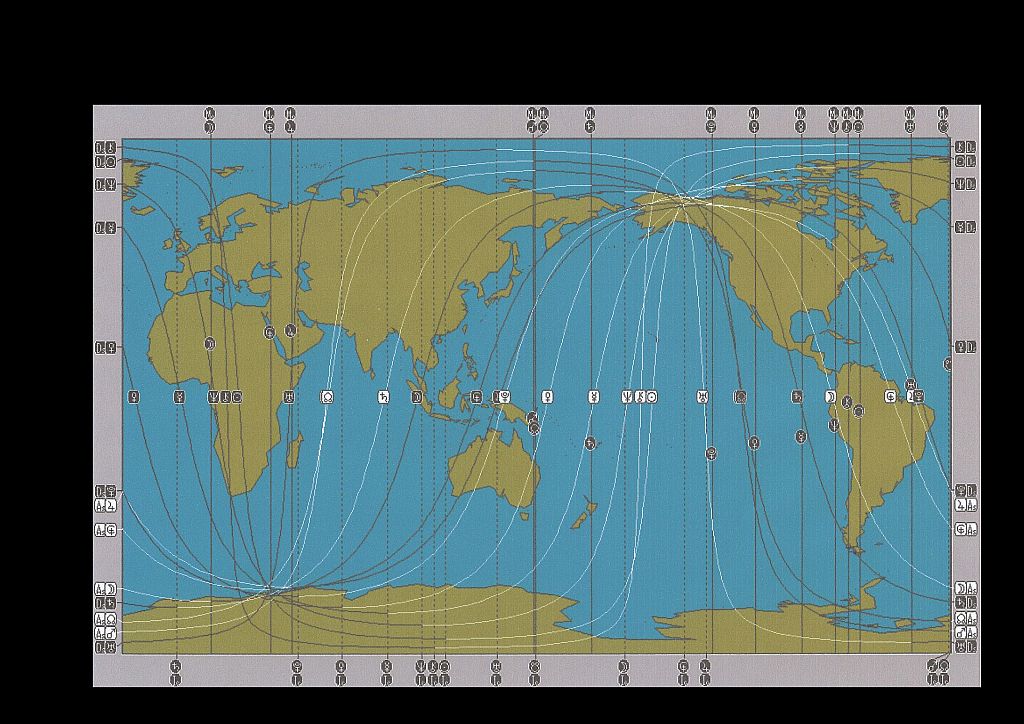