The time in Canberra, Australian Capital Territory for the recent Total Solar Eclipse of the Sun was 4:31 am AEST on August 22, 2017.  Solar Eclipses occur within minutes of a new moon so that the Sun and Moon are not usually in exact conjunction in the eclipse chart, whereas they are in exact conjunction in a new moon chart.  For a total solar eclipse to occur the Moon Nodes axis is also in a close conjunction to the Sun and Moon (Eclipse Chart Canberra. Fig. 1) 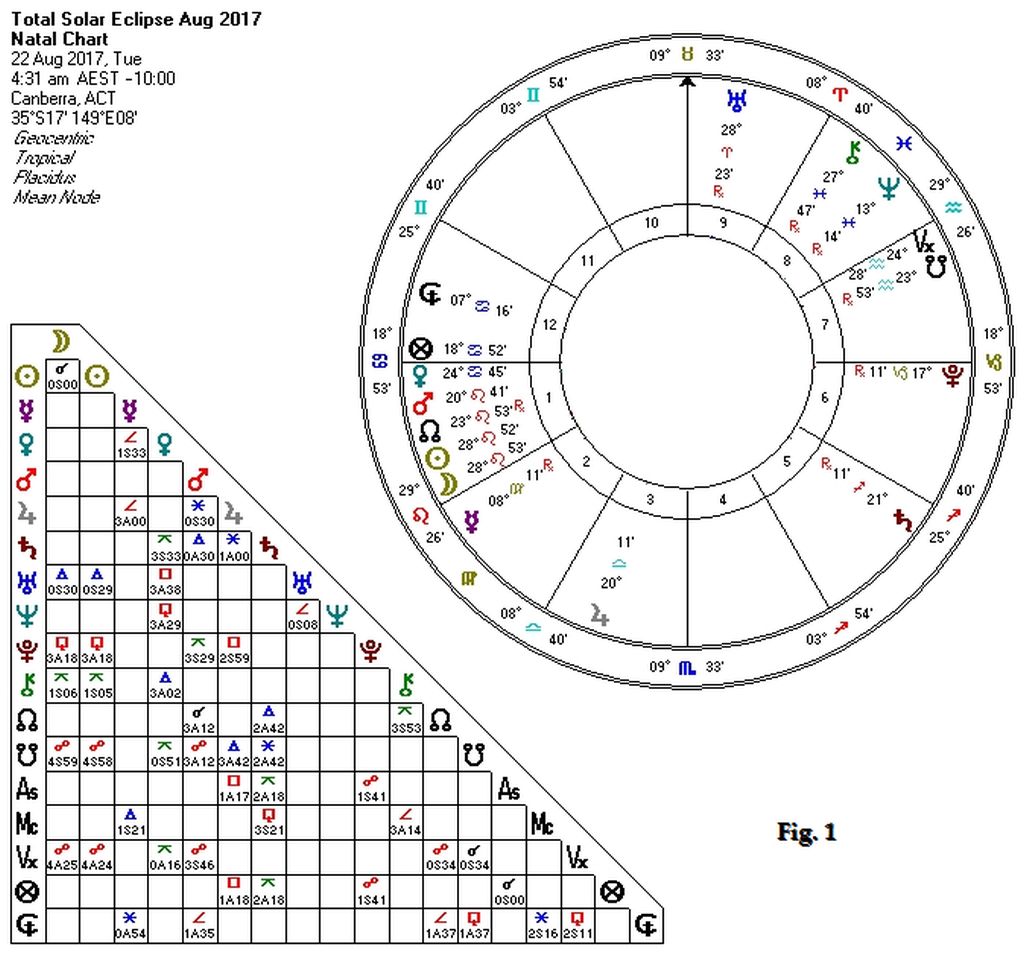 In themselves Solar Eclipses are neither positive or negative, they are 'activators'.  However some are considered better than others, depending on what aspects the Sun Moon conjunction makes to the other planets and how the eclipse chart aspects your birth, progressed or directed chart.  The effects of an important eclipse like this one can be felt up to 6 months before and 6 months after the eclipse date.

The August 22, 2017 Sun-Moon conjunction (one minute of orb) of the Solar Eclipse chart was in trine to Uranus, sesquiquadrate Pluto and quincunx Chiron.  18 deg. 53min. Cancer was on the Ascendant, forming an opposition to Pluto and 'T' square to Jupiter (the 'make or lose a million' configuration).  Rising in Canberra was Venus in Cancer, Mars, Northern Moon Nodes and the Sun and Moon in Leo, with Mars in a wide conjunction (8 deg. 11min. orb) to the Eclipse.  Astrologically, the chart speaks of power issues and the financial state of the nation.

THE GEODETIC CHART OF AUSTRALIA (Fig. 2) is measured between the 0hrs. meridian at Greenwich and Canberra, ACT.  The location gives Australia a Geodetic Midheaven (Government, Party in power, National honour) of 29 deg. 07min. Leo and a Geodetic Ascendant (people of Australia, our lifestyle and physical conditions) of 19 deg. 41min. of Sagittarius.

The Australian birth chart for January 1, 1901, which was when Australian States joined to form a Federation, is popular with astrologers.  The chart has a large number of planets in Sagittarius, with the Sun conjunct Saturn in Capricorn. These positions, normally placed in the 3rd house of communications, trade and freedom of speech and 4th house (history, deep rooted traditions, real estate) swing up to the 12th and 1st houses in the Australian Geodetic chart.  The 12th represents secret enemies of the people, epidemics and disappointments. 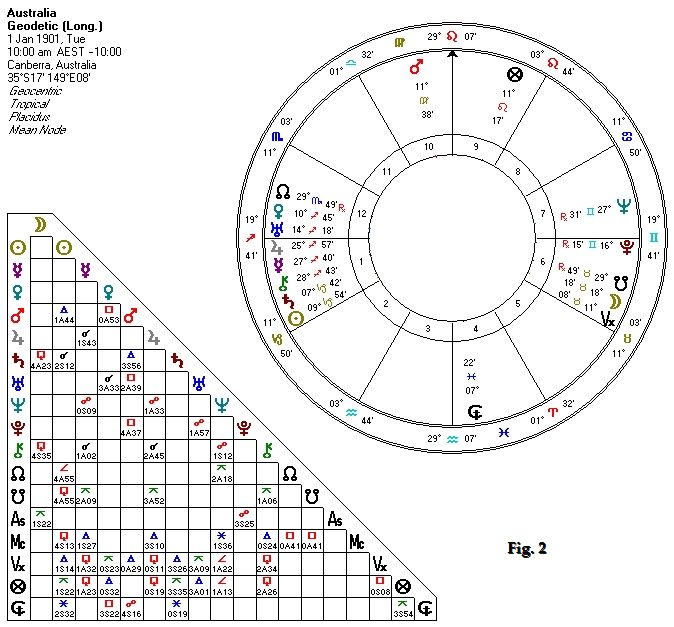 Placing the August 22 Solar Eclipse Chart around the Australian Geodetic chart as a Bi-Wheel indicates powerful leadership debates (Mercury (eclipse chart) conjunct Mars (natal) in 10th house).  Saturn in the eclipse chart is conjunct the natal Ascendant  = depression, delays and limitations affecting the people.  The last time Saturn was in this position was in 1987. (Australia Geodetic Traditional Chart & Eclipse Fig. 3) 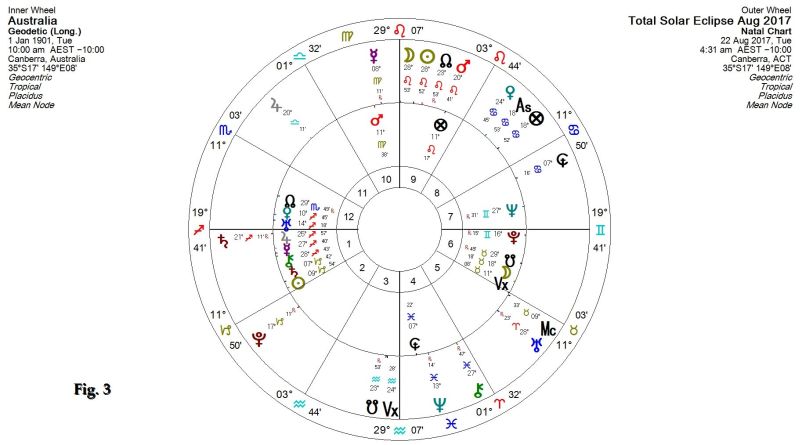 As an added point of interest the 'T' square in Australia's natal chart between Mars = Uranus/Pluto is highlighted by its placement in the Geocentric chart and activated by the transiting Uranus semi-square Neptune of the Eclipse chart.  This gives some insight into the spurt of increased violence and aggressive, out-of-perspective action in Australia.  Victims and perpetrators would probably have this pattern triggering patterns in their own charts.  The Australia Geodetic Cosmobiology Bi-Dial & Eclipse (Fig. 4) clearly demonstrates the pattern. 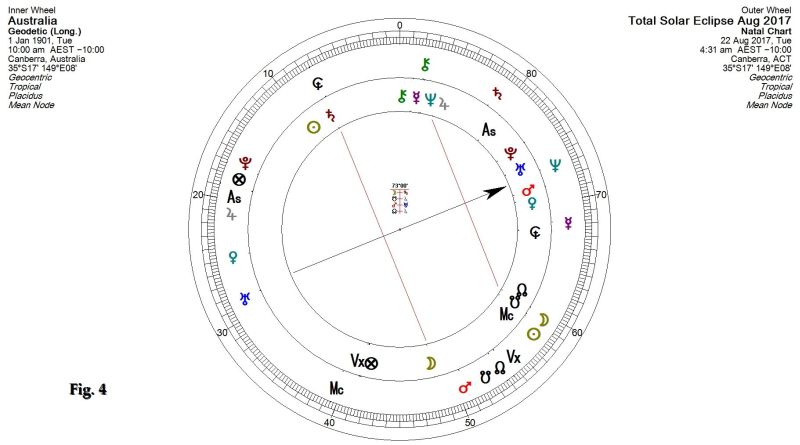 Australia's natal Saturn is at 7deg. 42min. Capricorn, so transiting Saturn is in the last degrees of its twenty nine and a half year cycle, with a new cycle to begin in early 2018 = ending old conditions, starting new directions.  The actual Solar Eclipse falls in the Australian Geodetic 9th house of law, religion, philosophy, overseas connections and travel.

In recent years we have weathered the roller coaster ride of Australian politics as our country's leaders were unceremoniously changed.  Once again in 2017 there seems to be an atmosphere of competition and unsettlement.

As an experiment I placed the calculated birth planet positions of Australian leaders into the Australian Geodetic houses, to replace their own natal birth chart Ascendant, Midheaven and house cusps.  The Geodetic chart enables us to see how particular politicians blend into the Australian political structure.  This is also helpful when the exact birth time of a politician is unknown.  In this case the natal chart is calculated for noon with only the fast moving natal Moon in question. (Read 'The Swings & Roundabouts of Australian Politics - A Geodetic Viewpoint', another article on this website, for more information about the Geodetic chart)

When researching the Geodetic chart I found some interesting comparisons.  It is surprising how many PMs and ex-PMs had an important planet conjunct, or within a few degrees, of the Australian Geodetic Midheaven point of leadership and Government.  The Australian Geodetic Midheaven of 29deg. 07mins. Leo is one of the most powerful degrees in the zodiac as it is conjunct the Royal fixed star Regulus, which is said to endow continuing success and power.

Because several of our recent Prime Ministers were born within a certain time frame, slow moving Pluto was placed in the late degrees of Leo or early degrees of Virgo, conjunct the Australian Geodetic Midheaven. For them the Canberra location equals power and transformation, but also power struggles and upheavals.  The PM and ex-PMs concerned are ..

Malcolm Turnbull our current PM was born 1954.. Pluto 26 deg. 29min. Leo within two and a half degrees of the Geocentric Midheaven) in the 9th house of law, philosophy and international relations.

Tony Abbott born 1957 ..Pluto 2 deg. 06min Virgo within 3 degrees of the Geocentric Midheaven in the 10th house of profession and worldly honour.

Kevin Rudd born 1957 only one and a half months before Tony Abbott .. Pluto 1 deg. 04min. Virgo, 2 degrees from the Geocentric Midheaven in the 10th house of profession and worldly honour.

John Howard born 1939 with natal Mercury the planet of communication at 24 deg. 02min Leo, within 5 degrees of the Geocentric Midheaven in the 9th house of law, philosophy and international relations.  This is an especially positive point as it demonstrates an ability to communicate with and be understood by, the Australian public.

Paul Keating born 1944 with natal Jupiter the planet of expansion and good luck within 4 degrees of the Geocentrid Midheaven in 9th house of law, philosophy and international relations.  This position suggests great feelings of self-worth, optimism and good luck.

Malcolm Fraser born 1930 and  Bob Hawke born 1929, both with slow moving natal Neptune conjunct the Geocentric Midheaven (Mr. Fraser nearly 2 degrees or orb and Mr. Hawke four and a half degrees of orb). This is a most interesting conjunction, associated with important and relevant connections to foreign lands, sensitivity to others' needs, sometimes a charismatic personality and influential media links. It can also represent some confusion and misunderstandings in public life.

Current Prime Minister Malcolm Turnbull (born 1954) is a 'Cusper' with his natal Sun degree on the cusp or dividing point between Libra and Scorpio.  We would need his exact birth time to establish the exact Sun sign.  Neptune is only 4 degrees from the Sun, suggesting a sensitive and caring man.  Mercury the mind planet in Scorpio highlights a sharp mind and is conjunction to Saturn = serious plans, stregnth and reliability.

Mr. Turnbull was born under the balsamic phase of the Moon, which means his greatest power is within, so he is reluctant to act without due consideration.

He has a wonderful pattern of success involving Mars, Jupiter and Uranus.  Combined with his Pluto on Australia's Geodetic Midheaven he is able to draw people in, but they must learn to be patient with him and appreciate his strengths.

Current Opposition Labour Party Leader Bill Shorten (born 1967) has the Sun and Mercury in Taurus in Australia's Geodetic 6th house of civil service, the military, employment and the working class.  However both the Sun and Mercury are opposition to confusing Neptune in 12th house of secret enemies.  It explains why he has attracted trust issues, but also suggests a strong interest in education and the health services available to the nation.

Interestingly the Mercury opposition Neptune pattern is present in Australia's natal chart, in this case possibly indicating the huge number of foreign-born people attracted to Australia.

Mr. Shorten's natal Pluto is 19 degrees away from the Australian Geodetic Midheaven, meaning that seizing power is much harder for him, but his Moon falls on the Descendant of this chart, indicating that he can trigger the emotions of a great many people.  He was born a couple of days after the New Moon, a period associated with acting on his ideals and instincts and facing the consequences later. 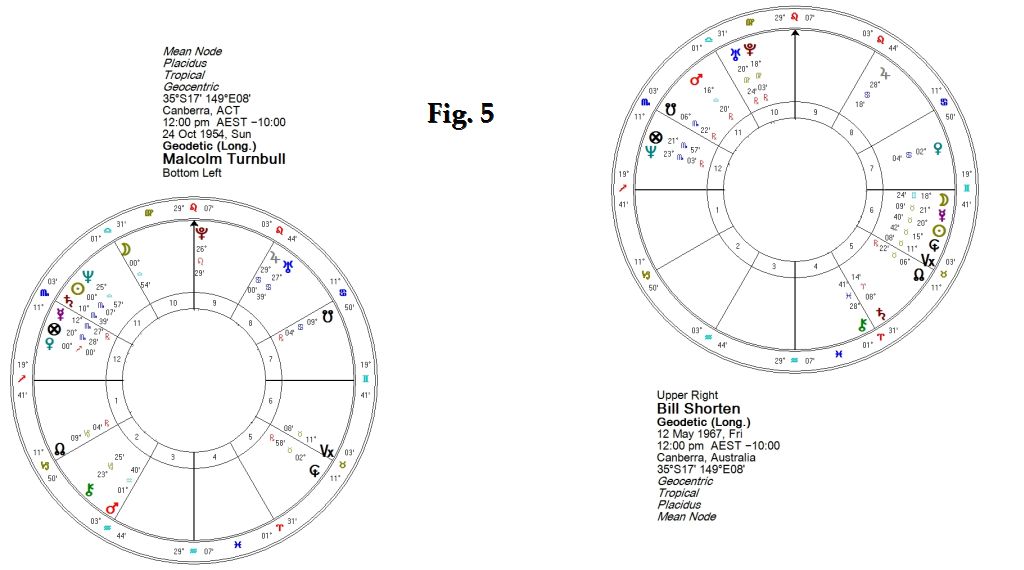 Australia and the U.S.A.

In his birth chart America's President Donald Trump has an Ascendant or rising sign of 29deg. 57min. Leo, with Mars rising at 26deg. 46min. Leo.  His Ascendant is less than one degree from Australia's Geodetic Midheaven and his Mars less than two and a half degrees from that point, meaning he is seen by Australians as determined and aggressive.

The fact that the August 22, 2017 Total Solar Eclipse is conjunct Australian's Geodetic Midheaven and conjunct US President Trump's Ascendant and Mars suggests activation and increasing action and reaction between Australia's leadership and the USA.  Australian PM Malcolm Turnbull's natal Pluto, also conjunct this point, could indicate powerful combined objectives for a hopefully peaceful, rather than aggressive outcome.  However all does not look like smooth sailing. (Fig. 6 Tri-Wheel & Fig. 7 (Tri-Dial) Turnbull Geodetic, Trump and Solar Eclipse) 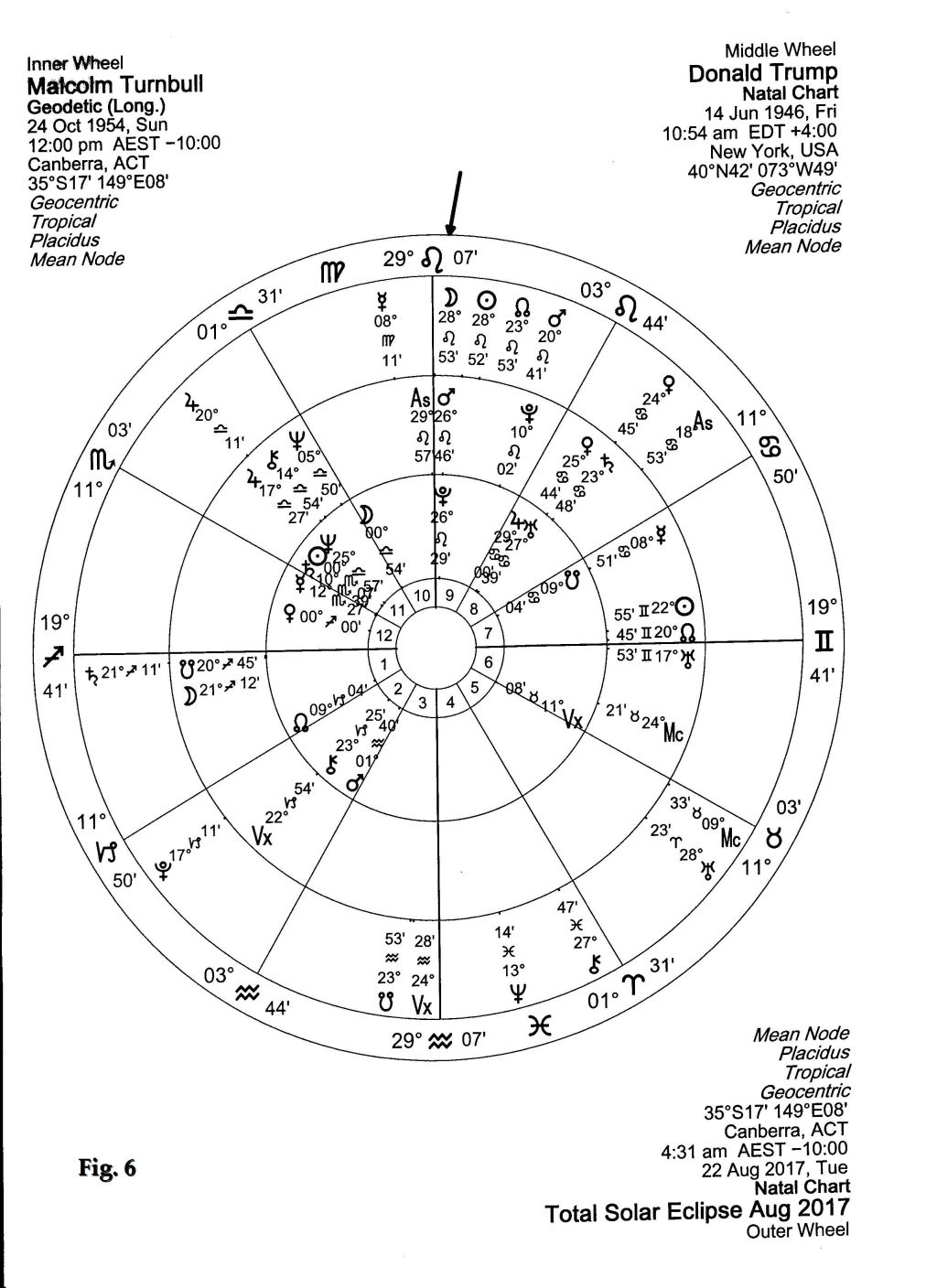 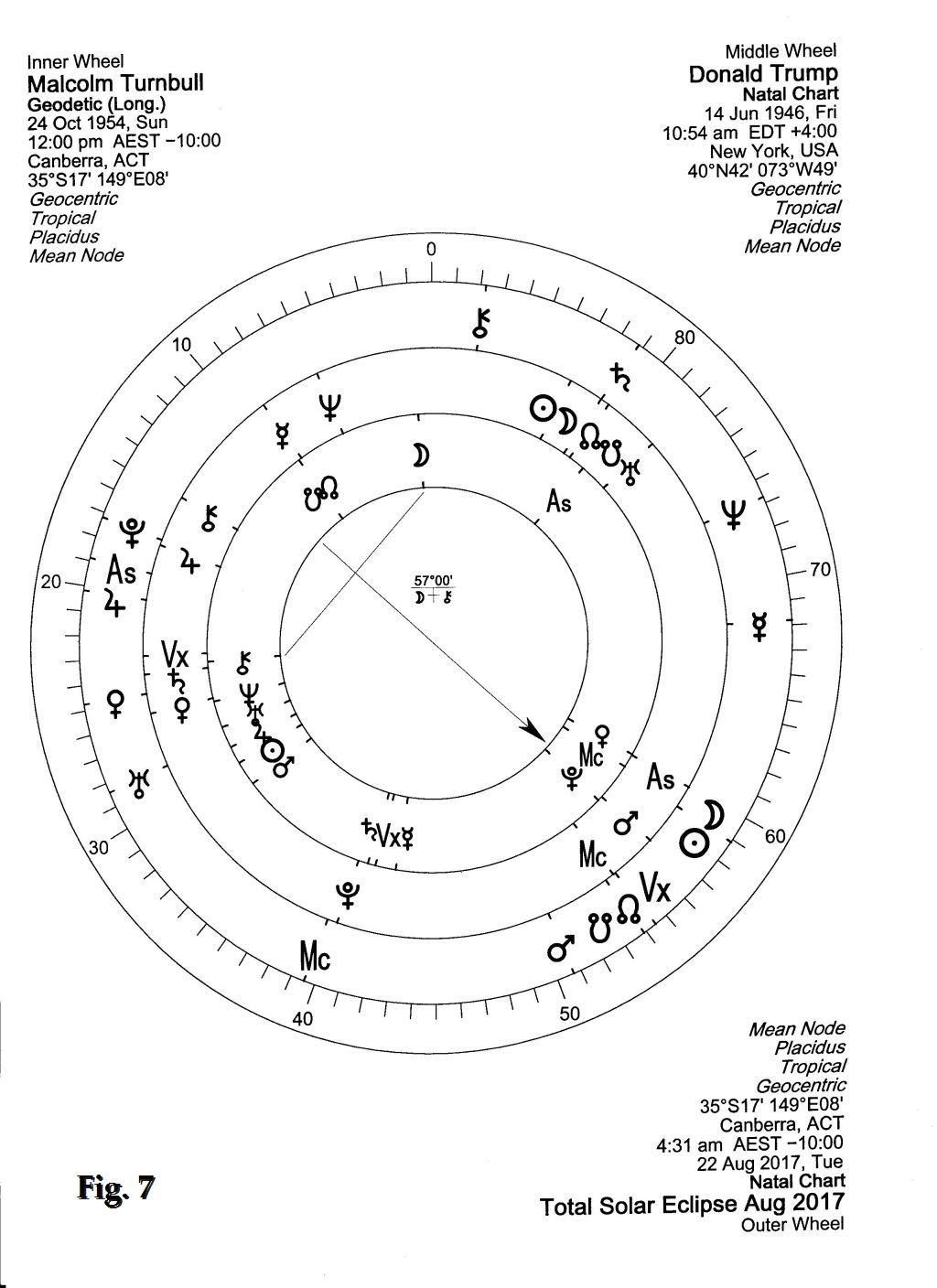 In addition to Mr. Trump's natal Ascendant of 29deg. 57min. Leo being conjunct the Royal Fixed Star Regulus, with Mars only 3 degrees away, he is a Gemini born under a full moon and a total lunar eclipse, with his Sun at 22deg. 55mins. Gemini and Moon 21deg. 12min. Sagittarius.  This natal pattern links strongly to the Saturn of the August 22, 2017 solar eclipse, which is 21 deg. 11min. Sagittarius = delays, limitations, separations, lessons to be learnt.

Mr. Trump also has 3 planets in Cancer and strong connections to America's natal chart, which is always a plus for prospective Presidents.  He is at the beginning of his 12 year Jupiter cycle, which means his best option is to plant strong seeds for the future, rather than look at this current period as a time of reaping.