Both left us in the month of August. An astrological review of their last day.

To label Robin Williams a comic genius is a huge understatement.  He was so loved world wide that for many his death was felt as a personal loss. (Fig. 1 Robin Williams Natal Traditional Chart) 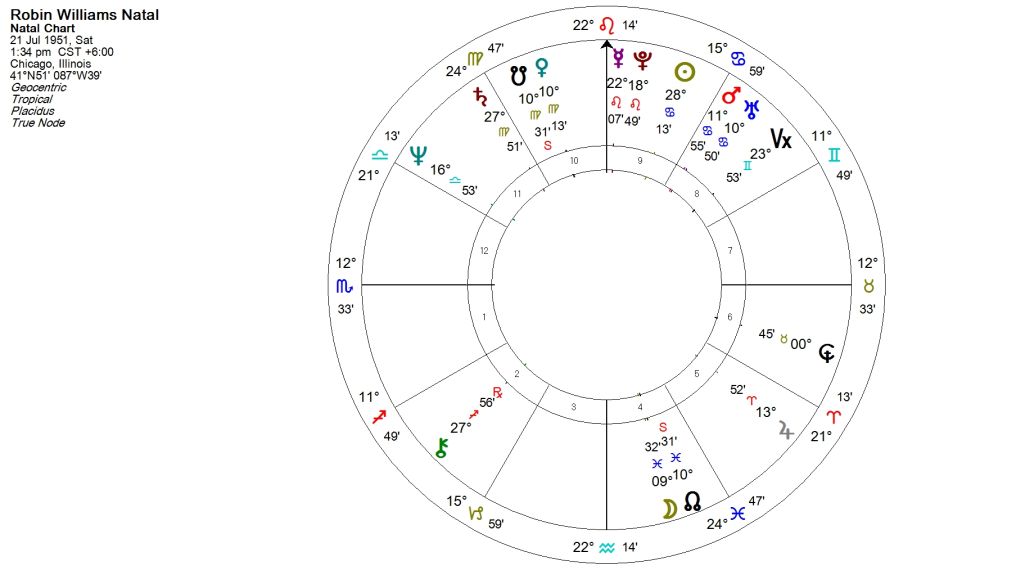 The power and sharpness of his mind surpassed all borders world wide (Pluto, ruler of his chart, conjunct Mercury and the Midheaven in Leo in 9th house).  Who can forget his movie portrayal of “Mrs. Doubtfire“, the maternal, loving, but sad father (Sun in the Pisces decanate of Cancer, quincunx Chiron).

An outstanding feature of Robin’s chart is Mars conjunct Uranus in Cancer in 8th house, which is semi-square to Mercury (=dynamic, explosive, machine gun responses and communications).  The conjunction is also trine to the Moon and North Moon Nodes in Pisces in 4th and square to Jupiter in Aries in 5th (=brilliant creative success).

However the Mars Uranus combination shows emotional aggression buried in the 8th house and kept private with his Scorpio Ascendant.  It is not uncommon for suicides to be the result of anger and aggression directed at self and Robin’s chosen suicide method of hanging is consistent with his aggressive frustration.

If only he had discussed his feelings with a professional astrologer before taking action.  At the time of his death on August 11, 2014 Robin’s secondary progressed Sun at 29deg. 02min. Virgo was opposition the fixed star Scheat (the drowning degree).  It had passed his natal Saturn (27deg. 51min Virgo) over the previous 12 months and was applying to his progressed Saturn, which is a limiting period for anyone – at any age.

Those born with their natal Sun in fairly close proximity behind their natal Saturn will experience the faster moving secondary progressed Sun conjunction to natal Saturn and the slow moving progressed Saturn, not necessarily in that order.  Robin’s natal Sun (in Cancer) was sextile his natal Saturn (in Virgo) at birth.  His secondary progressed Sun was conjunct natal Saturn on June 1st, 2013, but would not conjoin his sp Saturn until February 28, 2021.  Robin was already in this trough of “learning through hardship”, a period renowned for health problems, especially if it occurs when we are older rather than younger.

At what age the conjunctions occur depend of course on the exact distance between the Sun and Saturn and also whether Saturn was retrograde at birth.  Only a percentage of the population will experience this cycle in their life time. 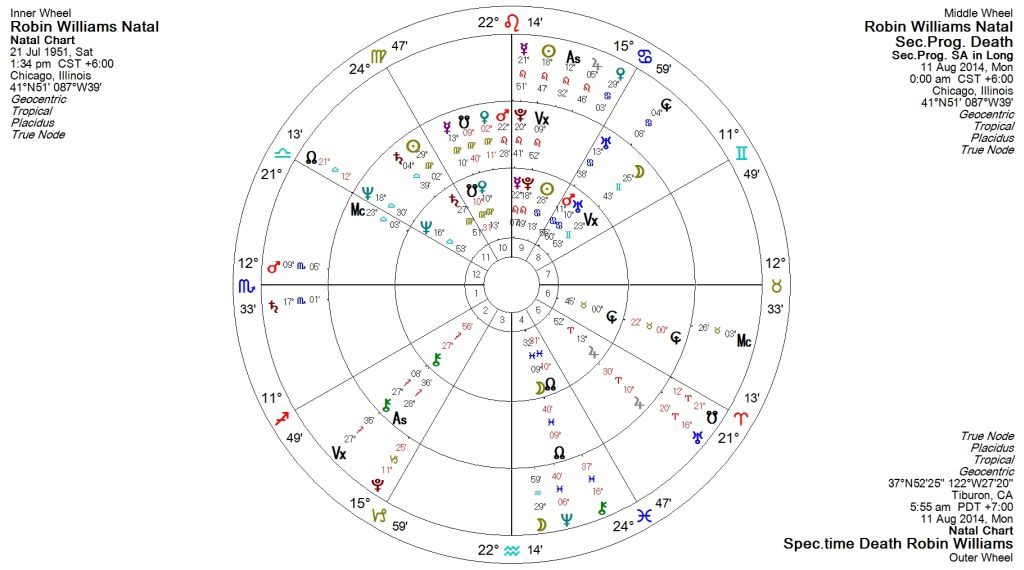 Robin’s natal Ascendant in Scorpio is in a close semi-square to both his natal Saturn and Chiron (=the wounded healer). His secondary progressed Ascendant at 28deg. 36min. Sagittarius had been conjunct his natal Chiron (27deg. 56min. Sagittarius) for many months and his sp Moon at 25deg. 43min.Gemini was applying to the opposition of this conjunction.  His secondary progressed Sun and natal Saturn formed a ‘T’ square to this opposition.

Transiting Pluto conjunct the Saturn/Neptune midpoint was in close opposition to Robin’s natal Mars in 8th for the whole month of July 2014 (= a serious illness heavy emotional depression, lack of creative energy).

The Mars/Saturn midpoint can be interpreted as intense work, focus, cutting of ties or the cutting of an energy source (death).  Because of the involvement of Mars, it is naturally a much faster transiting midpoint than Saturn/Neptune.  On August 11, 2014 the day of Robin’s death, transiting Mars/Saturn was at 13 deg. 03min. Scorpio, conjunct his natal Ascendant (12deg. 33min Scorpio), which in turn aspected his natal Saturn and Chiron. Reinhold Ebertin interprets Mars/Saturn = Ascendant as “A person whose advancement in life takes place with great difficulty only, obstacles or inhibitions caused by other people, illness, separation, mourning and bereavement.”

When examining Robin’s chart in depth, his extraordinary suffering is apparent.  Without confiding in others to gain an alternative perspective, it can be understood why he could not imagine another course of action at that time.  (Fig. 3 Tri-Dial Robin Williams Natal, Sec.Progs. & Transits Speculative Time of Death). 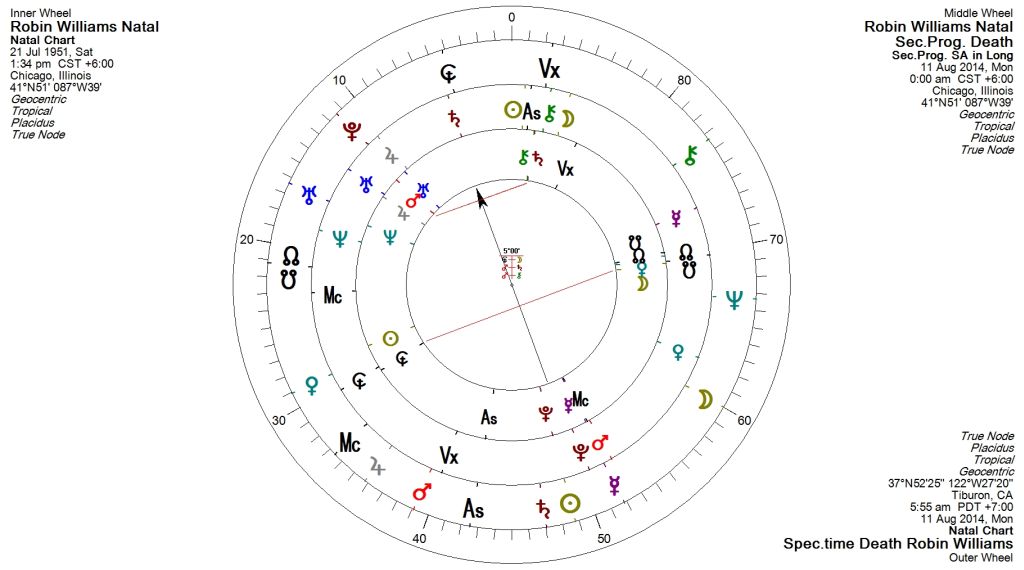 Elvis Presley had an amazing birth chart (Fig 4 Natal Traditional House Chart).  Like other performers born under the sign of Capricorn, his natal Sun progressed into Aquarius, the magnetic sign of the masses (in his case by 13 years of age, to conjoin with the Moon Nodes).  Even as an impressionable young boy Elvis would have recognised his destiny as a man of the people. 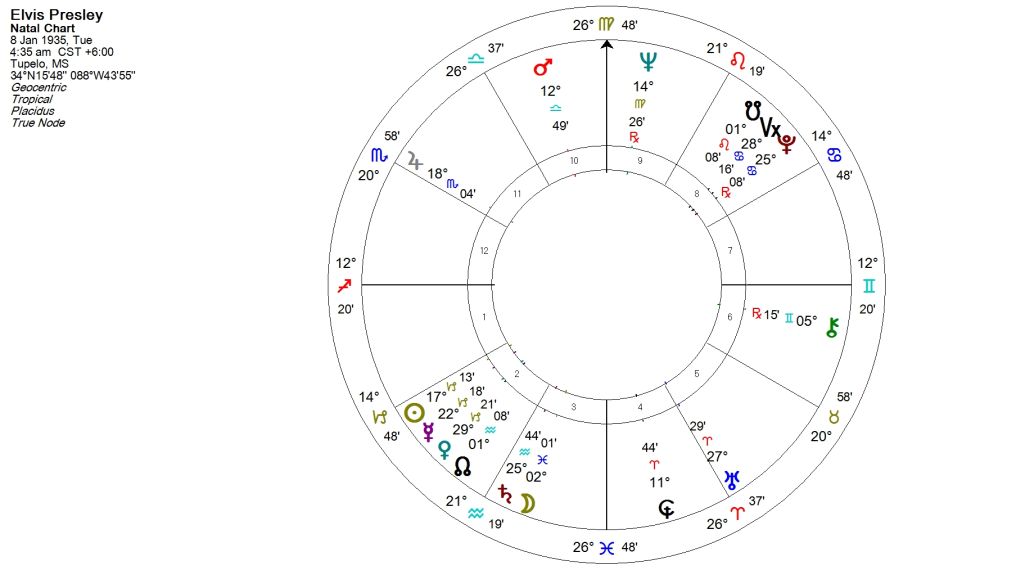 Because his natal Midheaven in Virgo formed a Yod (‘finger of God’) to Saturn and Uranus, Elvis would have aspired to ‘break new ground’ in the areas of communication (3rd house Saturn) and entertainment (5th house Uranus).

The complex pattern of his natal Venus involved natal Uranus, Neptune, Pluto, the Moon Nodes axis, Ascendant, Midheaven and Vertex, so there was no limit to his charisma and drawing power.  The down side however, suggests a complicated love life, without peace or true fulfilment, attracting far too much action and reaction to find true happiness.  People perceive remarkable Venus patterns such as these as the essence of love and attraction.  It takes an exceptional individual to recognise the dangers of such patterns in their life.  Very few know when to stand back from the flood of public response and keep their feet on the ground.

Elvis Presley’s natal Sun at 17 deg.13 min Capricorn was only 38 deg. 31 min. behind his natal Saturn at 25 deg. 44mins Aquarius, even closer than the pattern in Robin Williams natal chart.  Elvis’ secondary progressed Sun was conjunct natal Saturn on December 10, 1972, which he weathered, but with declining health.

On the day of his sudden death, August 16 1977, Elvis’sp Sun had already changed sign to 0deg.28 Pisces and his secondary progressed Saturn was 0deg. 39 min Pisces, only 11 min of orb from the exact conjunction, which occurred after his death on November 4, 1977.

Transiting Sun was only 3 degrees past a conjunction to transiting Saturn and applying to the opposition to natal Saturn and secondary progressed Mercury.  (Fig. 5 Elvis Presley Natal, Sec. Progs & Transits Speculative Time of Death).

In addition Elvis was in his ‘mid life crisis’ period between 42 and 47 years old, when the hard aspects of Cosmobiology double up in intensity on the 90-degree work dial, generating a great rise or fall, or at the very least a major reassessment of the life direction.  Very close natal aspects intensify the planetary energies and wider orbs in the natal aspects attract interconnected events during this period of several years.

Huge benefits are possible for those who progress gradually and pool their energies in order to peak at this time.  However the duplication of the difficult patterns can herald dangerous health problems if one over-stresses their energy and resources.  At the time of his death Elvis’ natal pattern involving Mars, Hades and Saturn had doubled in intensity and was activated by transiting Sun, Pluto and Hades (heart failure, allergy reactions).

In his birth chart Neptune was in square to the natal Ascendant and doubly activated on the solar arc in a hypersensitive, spiritual manner.  Transiting Neptune was in a waxing square to its natal position and conjunct the natal Ascendant, indicating the strong involvement of medications and an increased reaction to them. (Fig. 6 Elvis Tri-Dial Natal, Solar Arc and Transits speculative death time).

After such brilliantly successful careers, both Robin Williams and Elvis Presley in their own way, had chosen escapism as a way of dealing with the sense of rejection and limitation that the Sun/Saturn cycle brings.  Robin chose suicide, Elvis made lifestyle choices which led to his demise. Both were actually dealing with a health crisis.

A good discussion with a professional astrologer would have provided extra tools for both entertainers to deal with the circumstances in which they found themselves.  Also some hope as to when the difficult patterns would improve, not necessarily to change their circumstances, but at least to feel better about this phase of their lives.

Journal of Research of the American Federation of Astrologers, Vol. 15 (2015)