In Melbourne, Australia on the evening of November 21, 2016 we experienced extreme and unusual weather conditions.  The humid weather changes and increased pollen resulted in many people who had no history of asthma or respiratory issues experiencing severe breathing difficulties.

In addition to the unusual weather conditions, the culprit was thought to be pollen from perennial ryegrass, Lolium perenne, which burst into tiny particles and created a bio-bomb, inhaled through the nose and into the lungs.  It is an introduced, vigorous species which supplanted indigenous grasses in early colony days.  However it is not the species producing rye grain for rye flour.  Between October and December the ryegrass flower dominates Melbourne suburbs and produces a huge output of pollen.

9 people died and thousands more fought to breathe.  Ambulance and emergency facilities were stretched to the limit. 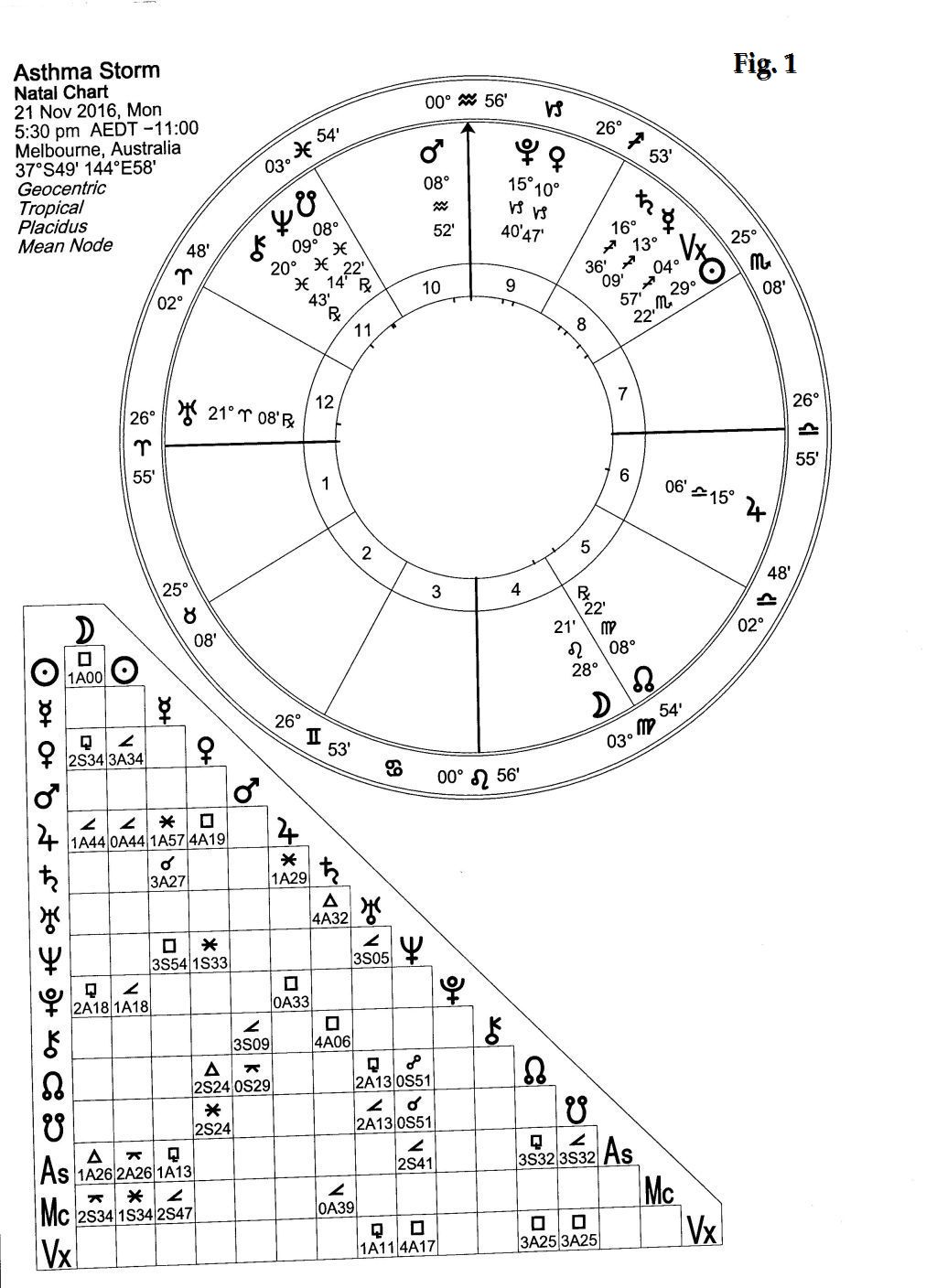 The Traditional Horoscope for the commencement of the storm at 5.30 pm AEDT Melbourne (Fig. 1) shows the chart ruler Mars, culminating in the air sign of Aquarius semi-square to Chiron.  Mercury the classical ruler of the lungs is in the 8th house of death conjunction to Saturn and square Neptune (sickness of lungs and breathing).  Neptune is conjunct the Moon Node axis in Pisces (medical links and associations).

In my opinion these charts do not provide enough information to be consistent with the shocking event.  It is therefore wise for the astrologer to explore and research alternative astrological techniques rather than refer to unrelated topics for an explanation.  ‘Nuts and Bolts’ astrology can provide your answer.

These often neglected positions can be useful in providing an added dimension to the chart, especially health and relationship issues and major mundane events affecting many people.

The longitude positions of the planets in the horoscope are those commonly used, but the declinations, regarded as vital by our forefathers (and mothers) are often omitted.

The Declinations provide the positions of the planets north and south of the celestial equator, which is considered to have a declination of 0 degrees.  Declination has a correspondence to terrestial latitude but on the celestial sphere.  If your computer software does not list them, they are easily calculated in the same manner as the planetary longitude positions, using a comprehensive Ephemeris.

Planets and points in a close degree of declination North or South are in Parallel (interpreted as similar to a conjunction).

Planets and points in a close degree of declination North and South are in Contra-Parallel (interpreted as similar to an opposition).

Famed German Cosmobiologist Reinhold Ebertin devised a Declination half-Wheel on which the declination positions are plotted in the north and south sections in a similar fashion to his 90 degree Cosmogram.

I have plotted the declinations onto a blank Declination form for the start of the Asthma Storm chart (Fig. 3).  Bingo! -- A whole new vista of classic interpretations appear.  With focus on astrology and health, the Parallels, Contra-Parallels and midpoints accurately describing the event.

Many of these interpretations come straight from Reinhold Ebertin’s book ‘The Combination of Stellar Influences’ and I have added some of my own interpretations to the comments.

The Declinations for the natal birth chart of a particular person can be plotted on the inside degrees of the wheel in another colour.  You can be sure from the list of those struck down on the day, there will be sensitive declination planets and points in the person’s birth chart that fall in the same degrees South (parallel) or opposite degrees North (contra parallel) to the main group of Asthma Storm declinations (that is Sun, Mars, Saturn, Pluto, Midheaven and the Vertex, between 19deg. 34min. and 21deg. 26min. South).

Despite these difficult patterns many vulnerable people did not suffer the extreme allergic reaction and overcame them without the tragic outcome.  This points back to the importance of good health habits and the strong genetic constitution of the individual, with the astrological implications being only one factor – but certainly an interesting one when looking back to the survivors and non-survivors of past health crises and epidemics.

“The Combination of Stellar Influences” by Reinhold Ebertin.

NOTE:  If any astrologer would like a blank copy of the Declination Wheel for research purposes, email me at pamrowe@astrocos.com.au and I will email one back to you.