THE BIRTH HOROSCOPES OF GIFTED PSYCHICS

It has been my destiny to draw psychics, musicians and medicos into my life. During my 39 years of practising astrology I have met many gifted psychics and found some surprising astrological combinations.

The following article is adapted from my article entitled 'How Clairvoyant Are You?', published in the February 1992 edition of the glossy magazine "Nature & Health". I have updated the article with additional thoughts and information.

Many astrology textbooks associate the Water signs (Cancer, Scorpio and Pisces) with intuition and psychic ability. This is only partly true, for all the zodiac signs have intuitive and healing qualities. It is essential to include other factors, namely the natal position of the Moon and Planets, Ascendant and Midheaven, to give a complete birth horoscope. Birth horoscopes vary considerably, depending amongst other things upon which planet or planets are rising or culminating, plus the balance of Elements in the chart. In some cases one Element, such as Water, dominates; in others, there are no planets or points in a particular Element.

Let us examine the psychic and healing potential of each of the four Elements -- Fire, Earth, Air and Water -- and then discuss a couple of case histories of famous psychics. If you do not know your complete horoscope, your Sun sign must suffice.

If you know the 12 important planets and points of your birth horoscope you can list them into a Grid and work with a point system to establish your 'Signature' sign. This is an easy way for a beginner to discover whether they are predominantly a Fire, Earth, Air or Water type.
Instructions for creating your Grid are contained in my book "Practical Guide to Astrology - Pathway to 21st Century", available through this website under 'Books & Resources'

In my own particular study of psychic's charts the dominant Signature signs were Taurus, Leo and Aquarius, which are all Fixed signs, but variable Elements.

The common factor shared by Fire signs is their ability to warm, energise and encourage others. They are great healers to which plants and animals respond, lamps to which moths will flock. As such, Fire signs must recognise their responsibility to others.

Fiery people can be impulsive and threatening. The pure energy of Fire demands correct discipline; misdirected energy can lead to burnout and depression. Those with an overload of Fire signs are frequently drawn to an area where they can offload some of their excess energy. Activities such as a creative career, dancing, sports and gardening will help maintain inner harmony. The healing hands of the Fire signs make them popular hairdressers and masseurs.

One of the most constructive examples of harmonising excess Fire that I witnessed was the case of Jean, a client with an extraordinary overload of Fire signs in her birth horoscope. Jean was a nurse in an aged care hospital. Curiously, after a full day's work, Jean would depart refreshed and happy, leaving behind a ward of patients more alert than when she had arrived. During the day the frail, elderly people had drawn on Jean's excessive reserves and natural order had been maintained.

People with a low number of Fire signs in their birth horoscopes can easily deplete their energy reserves. They should avoid placing themselves in long term situations with those who drain their energy, however inadvertently. Most low Fire people become quickly aware when this occurs and take swift action to protect and restore their vitality.
The Sun and Mars have an affinity with the Fire signs. If one is rising or powerfully placed in your birth chart you may demonstrate fiery qualities, even if you are predominantly an Earth, Air or Water type.

In the horoscopes of gifted psychics, Earth provides the 'grounding' factor. However great the intuition, inspiration and healing powers, they must be earthed if they are to help others. Those who have a low number of Earth points in their birth horoscope are often drawn to earthy people and modes of expression.

Earth feels, touches and senses. Earth people generate mental and material security to others, that is, make others feel safe. Earth can convert wild fantasies into workable solutions.

While some Earth people lack imagination, others hold a spark of divine inspiration, an obsession to transform an ideal into reality. The Earth healer can activate the natural healing process in another. The rock-like strength and sheer willpower of the Earth person boosts confidence and stimulates the immune system of the person seeking love and healing.

Saturn has an affinity with the Earth signs. If Saturn is rising or powerfully placed in the birth chart, the person may demonstrate Earth-like qualities, even if they are predominantly Fire, Air or Water types.

Air is needed to sustain life. Air people communicate, relate and rationalise. In the horoscopes of gifted psychics, Air brings messages from intangible sources.
Air people are the bearers of good and bad news. Often an Air person appears to bombard the listener with information and others, as an escape valve, switch off. Next time, remember that amidst the output could be valuable information meant for your ears alone, coming through the Air person as a vessel.

Air is a cooling regulator for the overheated and headstrong. Air people have a special gift for language; ideas, inspirations and messages can be readily understood by them and translated into a language comprehended by large numbers of people.

Mercury and Uranus have an affinity with the Air signs. If one is rising or powerfully placed in your birth chart you may demonstrate Air-like qualities, even if you are predominantly a Fire, Earth or Water type.

Water engulfs, surrounds and cools. It can change its shape and form, being heated to form steam and frozen solid to form ice. Water can gently or aggressively remould the coastline of a continent.
Water signs are generally highly receptive to the suffering of others, provided they keep their emotions in check. Water is a good conductor of electricity. Through Water, thought waves can break barriers of time and space. Water transcends logic and conscious thought and taps directly into the subconscious.

Unaware Water people can soak up physical and mental vibrations from others, sometimes in sympathy and sometimes as a psychic 'sponge'. Has it occurred to the Water person that their backache or depressed mental state may belong to someone else? If the difficulty is yours, deal with it. If not, help out, but don't feel obliged to wear it.

The Moon and Neptune have an affinity with Water signs. If one is rising or powerfully placed in your birth horoscope, you may demonstrate Water-like qualities, even if you are predominantly a Fire, Earth or Air type.

DOMINANT FEATURES OF THE PSYCHIC HOROSCOPE

6. A dominant emphasis of one or two of the ELEMENTS, that is Fire, Earth, Air or Water. (FOCUS)

In other words, the psychically gifted person will demonstrate a sensitive reception and the ability to channel power in an unusual manner. The great psychics are motivated by love. In recognising their gift, they recognise their responsibility to help and uplift others as a greater priority than indulging their own egos.

The repetition of the strongly placed Saturn in the charts was surprising, although on consideration, logical. The controlling factor is essential, otherwise sensitivity and excess power without discipline, could result in nervous or mental instability.
Highly sensitive people who do not have the benefit of a strongly placed Saturn would be wise to include 'grounding' in their lives through earthy people, earthy foods and lifestyle, exercise, the natural environment, gardening and of course pets to neutralise and balance negativity.
It is very common to be attracted to partners who provide the Fire, Earth, Air or Water energies you lack.

EDGAR CAYCE was born on March 18, 1877 at 3.30 pm LMT in Hopkinsville Kentucky USA. Whilst not medically qualified, he did health readings for a large number of people in a trance state -- providing extraordinary information on illnesses and natural remedies to assist and sometimes cure the ailment.

Cayce had a predominance of Water Signs (Sun, Mercury, Venus and Saturn in Pisces and Earth signs (Moon, Neptune, Pluto and the Midheaven in Taurus, plus Mars and Jupiter in Capricorn) in his birth horoscope.
The sensitivity of Pisces is grounded through the strong Earth factor. Saturn's conjunction to Mercury and Venus suggests tremendous channelling ability, but also many sacrifices. Cayce's Signature sign was Taurus.

Cayce had the Fire sign Leo on the Ascendant conjunction to Uranus, depicting his spark of inspiration and the ability to inspire others. The Leo Ascendant was square (90 degrees) to Pluto and sesquiquadrate (135 degrees) to Mars, demonstrating the enormous power at his disposal.

BERNADETTE, Saint of Lourdes was born Marie Bernadette Soubirous into a humble peasant family on January 7, 1844 at 2:00 pm LMT in Lourdes, France. On February 11, 1858 at the age of 14 in a small grotto near a spring, Bernadette had a religious vision of the Mother Mary. This and subsequent visions created such controversy within the Church that it was years before they were officially acknowledged.

The grotto spring now attracts masses of people to drink its healing waters and attend the church erected nearby. I happened to wander into this valley in Lourdes when a pilgrimage was taking place. Thousands of people were gathered, some in wheel chairs. On the walls of the grotto were hung numerous crutches, a reminder of those who had limped in and walked away. Although not of the catholic faith myself I was deeply moved by the extraordinary spiritual energy and hope vibrating through the valley, and became curious about the child Bernadette, who had started it all.

Bernadette was a Capricorn with Saturn also in Capricorn, 10 degrees from her Sun, suggesting a life of great discipline, with many difficulties to overcome. She eventually became a nun in service to others.

The large number of planets in Air signs (Mercury, Venus, Midheaven, Neptune and Jupiter in Aquarius, plus the Ascendant in Gemini) depicts Bernadette as a messenger, a bearer of news.
With so much Aquarius in her chart she would have been motivated by a great love of humanity. Aquarius is one of the fixed signs and people with Mercury, the planet of the mind in Aquarius, invariably display dedicated thought patterns and a desire to do things in their own unique way. In all the years of inquisition over the validity of her story, Bernadette never wavered in her convictions, but the spontaneity of her communication was in direct conflict with the limitations shown in her chart. The culminating Neptune, whilst reinforcing her spiritual aspirations, would have made her intentions subject to misinterpretation. Bernadette's signature sign was Aquarius. 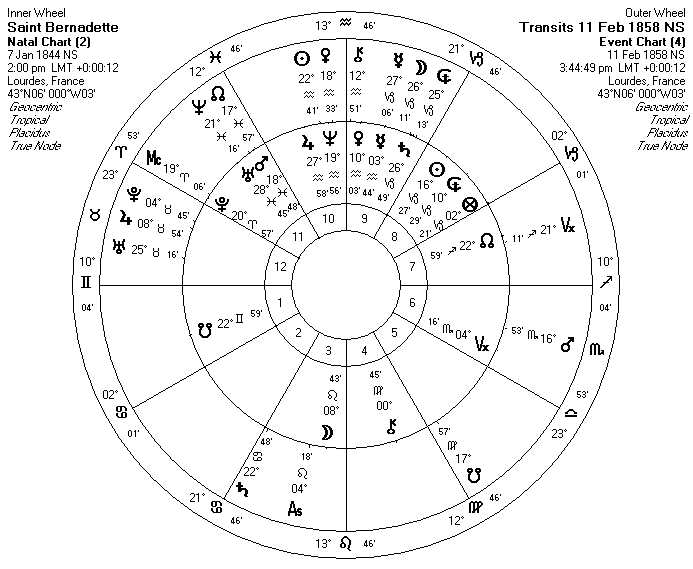 At the time of Bernadette's first vision on February 11, 1858, major activation of her natal Mercury (communication) occurred through transiting Pluto (destiny encounters and transformation). Transiting Neptune (sensitisation without boundaries) formed a T-square to her natal Moon Node axis. Natal Neptune was activated by the transiting Sun and Venus.

Mercury and Saturn had formed an opposition in the heavens for several days leading up to the event and, at the time of the event, transiting Mercury was conjunction to Bernadette's natal Saturn (grounding and earthing the spiritual). Because Saturn is an important planet in Bernadette's chart, (being the ruler of Capricorn and co-ruler of Aquarius) it is significant that transiting Saturn was opposing her natal Saturn, half way through its first 29.5 year cycle. On the day of the vision, the Sun in Aquarius was approaching a square to Uranus (unexpected events, sudden changing circumstances). 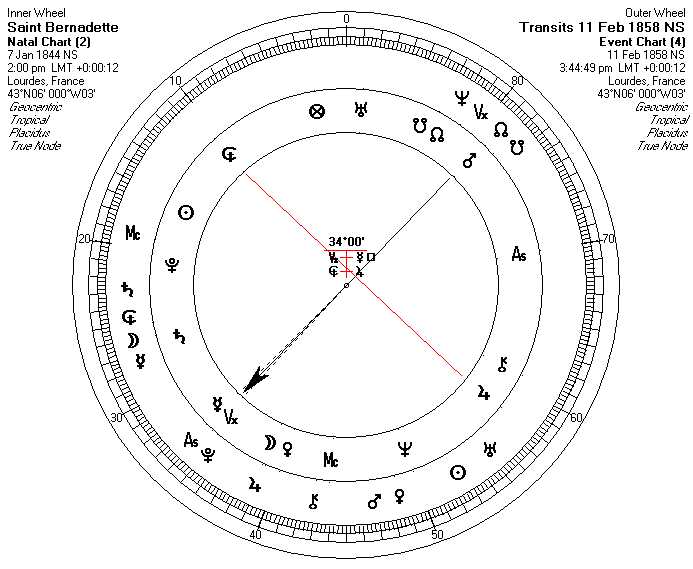