At 10:05 pm on October 1st 2017 at the annual Route 91 Harvest Country Music Festival, a crazed gunman sent a barrage of bullets from his room on the 32nd floor of the Mandalay Bay Hotel, Paradise, Las Vegas into the large crowd below..  The venue was a 15 acre lot, 450 metres from the hotel.  58 innocent people aged between 20 and 67 years old died and 489 received non fatal injuries before the gunman committed suicide.  It is the deadliest mass shooting committed by an individual in the US.

According to reports, the gunman, 64 year old Stephen Paddock, had checked into the hotel on September 25, 2017 with more than 10 suitcases holding 23 guns for his evil, premeditated act.  On that day Saturn was square to Mercury = serious plans, depression, blocking of the nervous system.

Why?  we ask..  How can normal people understand such action?

Can astrology ascertain that the location was unsafe and that those affected, through fate or circumstance, had somehow tapped into the astrological scenario of that moment?

Without the birth charts of the victims we can only consider the astrological patterns at the time of the shooting.  Also the horoscope of the USA and whether this and other recent events may bring about eventual changes in the law, or generate other safety measures to help prevent further such episodes.

The Mundane Traditional Chart for the event is calculated for 10:05 pm, the time shooting into the crowd started. The most outstanding feature of the chart is Saturn at 22deg. 18min Sagittarius, setting in the 7th house and opposition the 21deg. 10min. Gemini Ascendant.  The Ascendant represents the people in the environment and the 7th house open enemies, war, loss and limitation generated by a public enemy.

In fact Saturn was setting on the Descendant during the whole time of the shooting, which ended at 10:15 pm.

The Midheaven at 0 deg. 08mins of Pisces, a sensitive, artistic sign, was semi-square Pluto in the 8th house of the death.

Neptune, the ruling planet of 10th (Government, national prestige) was placed in the 10th house opposition Venus and Mars in 4th, semi-square Uranus in 11th, sesquiquadrate Jupiter (co-ruler of Pisces) in 5th and quincunx the Sun in 5th (describing the musical setting, romantic and happy people, and the male ‘outsider’).

Hypothetical Hades is rising and square the Sun (the destructive masculine power of the past, deficiencies from a previous life).

The Jupiter Uranus opposition has recently coincided with sudden unexpected shocks on a world level and the involvement of Neptune emphasises the confusion and deception necessary for the gunman to stage this event. 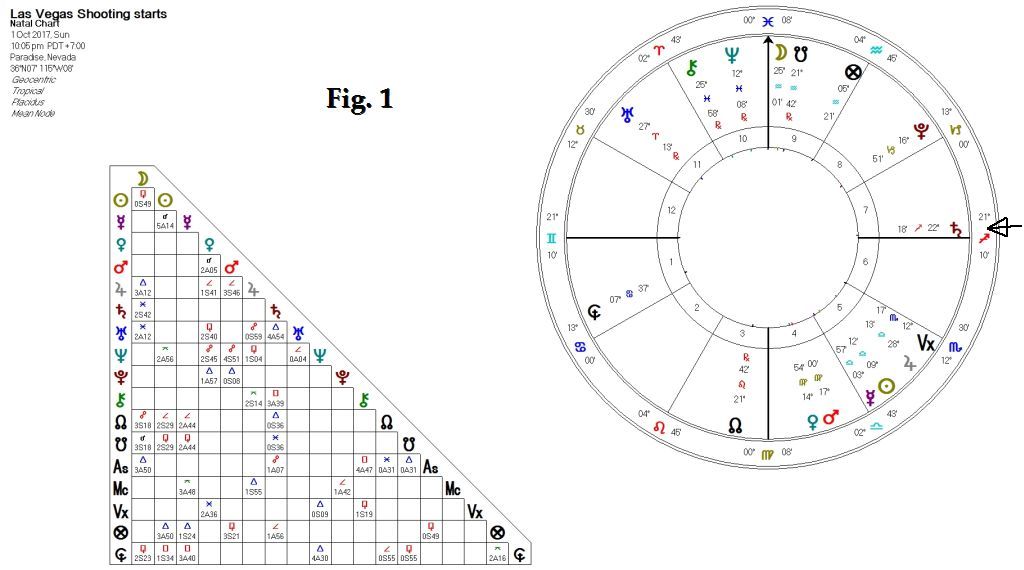 Saturn Ascendant = Moon/Pluto =depression, causing many upsets and a violent reaction in the environment. 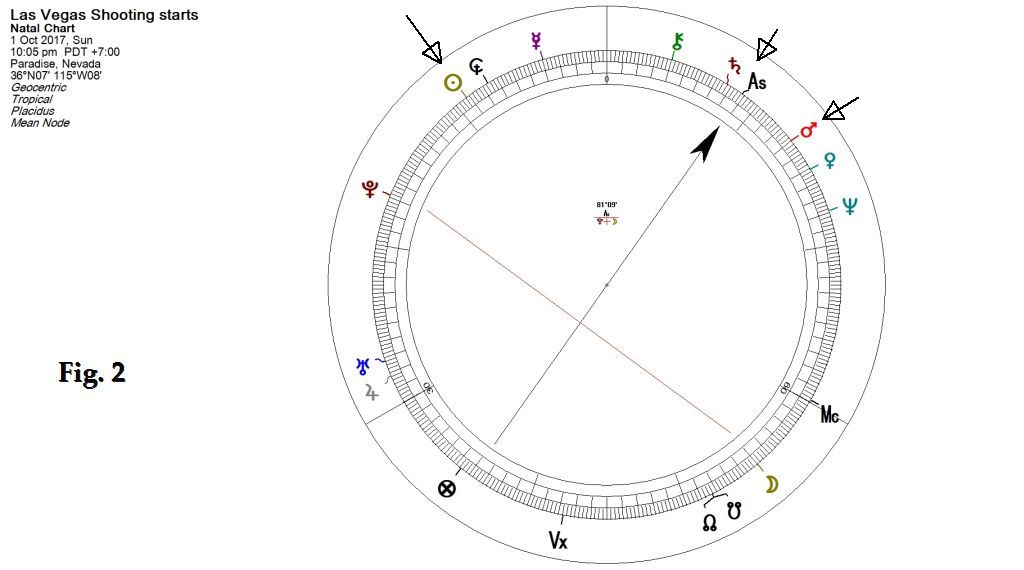 THE TRADITIONAL HOROSCOPE OF THE USA .. (Fig. 3)

Because more than one ‘time of birth’ of a country is often discussed and debated, we as astrologers must select a chart which, after research, works for us.  I have always favoured the July 4, 1776, 2:14:15 am LMT, Philadelphia chart, which I believe is the one favoured by famous early American astrologer Evangeline Adams.

Who knows why the American Declaration of Independence was signed at 2:14:15 am?  We will never know for sure and can only compare this chart with historical USA events.  However, it would not be the first or last time a document was signed at an unusual time.

The Ascendant or rising sign of this early morning chart is 7deg. 35min. Gemini conjunct Uranus.  In addition the chart ruler Mercury is in close semi-square to Uranus.

As a resident of another country who has travelled the USA extensively and made many friends there, I see the USA as representative of high level communication, invention, technology, theatre and film making.  And who can forget the extraordinary technological advancement made by the US as a result of their Moon landing in 1969? 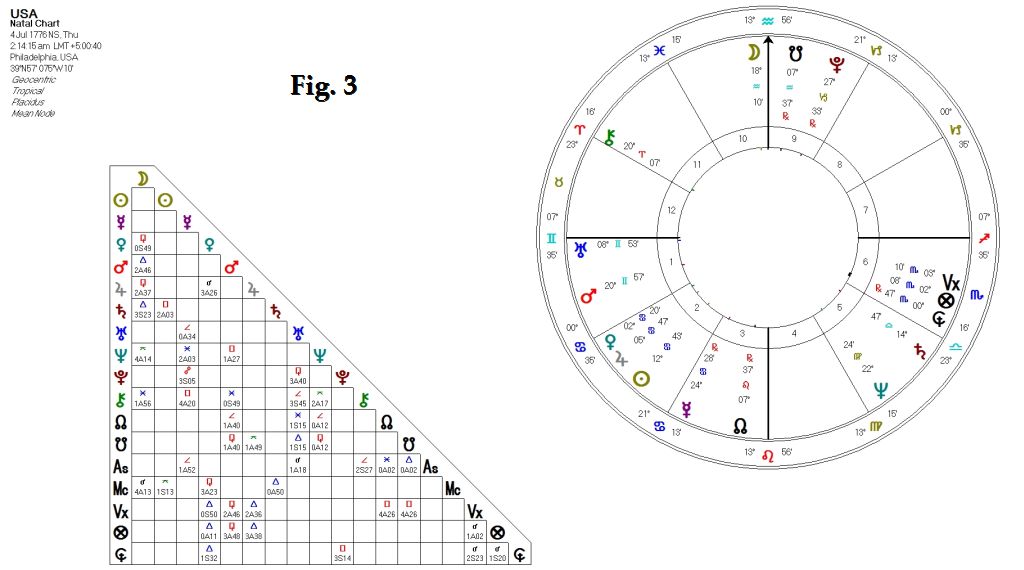 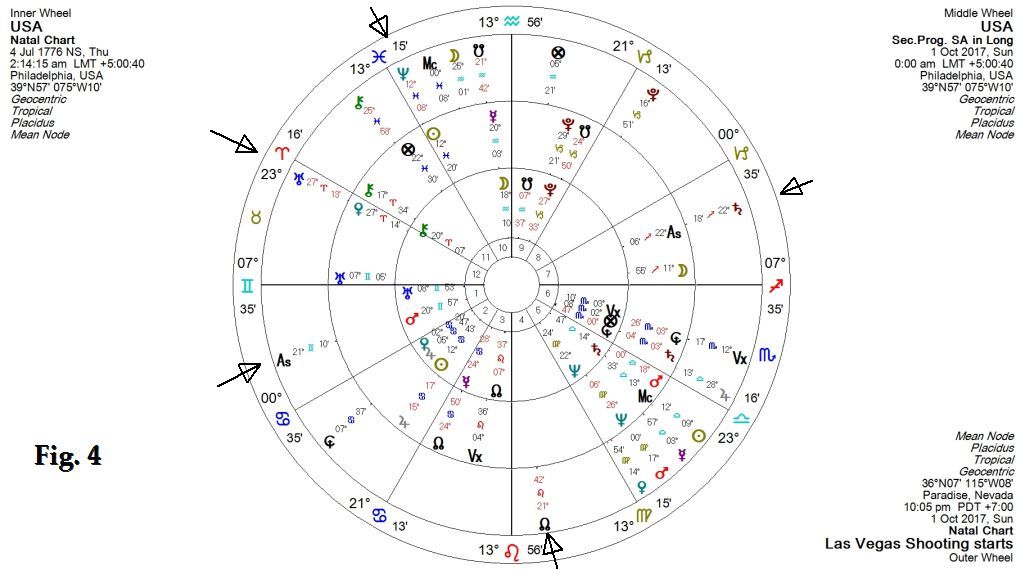 This chart combination is amazing and aptly describes the event.  Victims of this crime will have natal, progressed or directed horoscope positions aspecting more than one of the dangerous patterns present.  The strong Jupiter (protective) involvement suggests that although the event was shocking, it could have been worse with even more death and injury.

2. The SP Ascendant at 22deg. 06min Sagittarius is conjunct transiting Saturn at 22deg. 18min Sagittarius and opposition the natal Mars (20deg.57min Gemini) and transiting Ascendant (21deg. 10min Gemini). This important opposition is in a T-square to natal Neptune (22deg. 24min. Virgo) = death, cutting of ties as a result of illness, paranoia, but positively expressed as compassion and support by the masses.

There are other links which will enhance the story.  See what you can find.

The Tri-Dial works best with minimum orbs, so that the most active aspects and tightest orbs are visually apparent.  The 90 degree Cosmogram is an excellent tool for the intuitive astrologer, whereas the Traditional chart moves through the steps created by our astrological forefathers and mothers to create a clear, logical picture.

As with the Traditional Chart the inner dial is the USA natal chart, middle dial the USA secondary progressed chart and outer dial the transits for the event.

1. The Tri-Wheel pinpoints the USA natal Mars rising square to natal Neptune, (conjunctions, squares and oppositions are placed together on the Cosmogram), powerfully linking to the US secondary progressed Ascendant and Part of Fortune, plus the transiting Saturn Ascendant pattern.  On the other side of the dial (semi-square or sesquiquadrate) we see the US natal Vertex = SP Vertex = SP Hades = transiting Part of Fortune.

This is indeed a dangerous pattern suggesting a period of loss, endings and new beginnings, health issues and undermining factors.

2. Natal Pluto = SP Venus, Sun and Moon = transiting Jupiter, Uranus and Neptune = disruption and deception, transformation in partnerships and in life of a loved one, fate and destiny.  Spiritual journey,

3. The Jupiter = Pluto and Pluto = Jupiter patterns are present = important legal matters, big losses. So it appears that as well as the tragic personal losses there will be large financial issues.

When the fast moving points Ascendant and Midheaven join the slow moving planets which form difficult or dangerous patterns, they act as triggers.

Therefore the location for the event in Las Vegas was not a safe place for many people to be at 10:05 pm on October 1st, 2017. 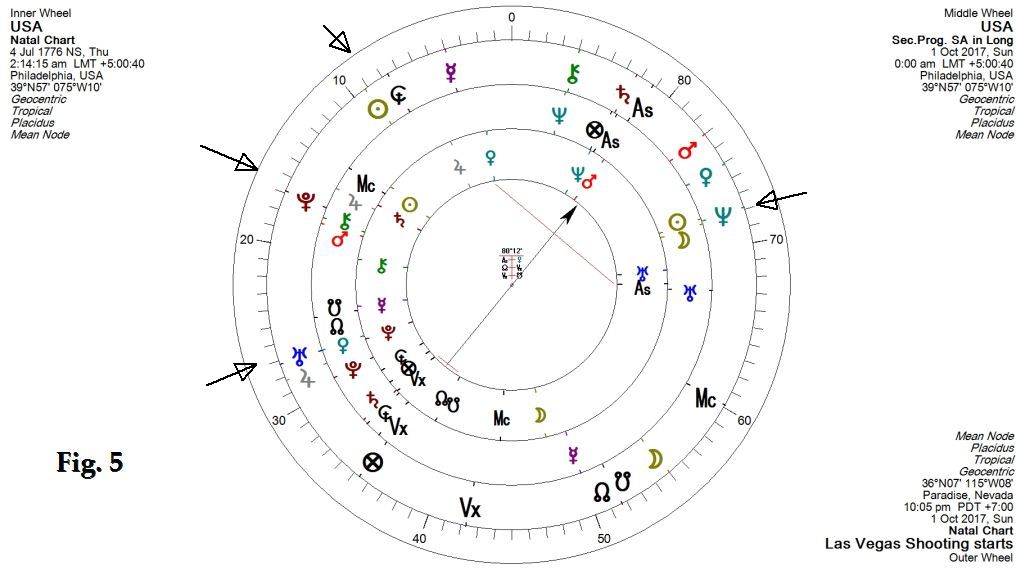 Note:  At 9:59 pm, 6 minutes before he commenced his rampage, Paddock fired more than 200 rounds through his door, wounding security guard Jesus Campos in the thigh.

This made little difference to the chart, in particular the setting Saturn, which had set by the time the shooting ended at 10:15 pm.

"Rules for Planetary-Pictures" by Ludwig Rudolph